With its stunning natural beauty, intriguing historical and archaeological sites, steadily improving hotels, a heritage of warmth, and competitive prices, Turkey has a lot to offer visitors looking for: breathtaking natural wonders, distinctive historical landmarks as well as fascinating underwater sculptures. For centuries, Turkey has also served as a meeting point for many different religious groups. 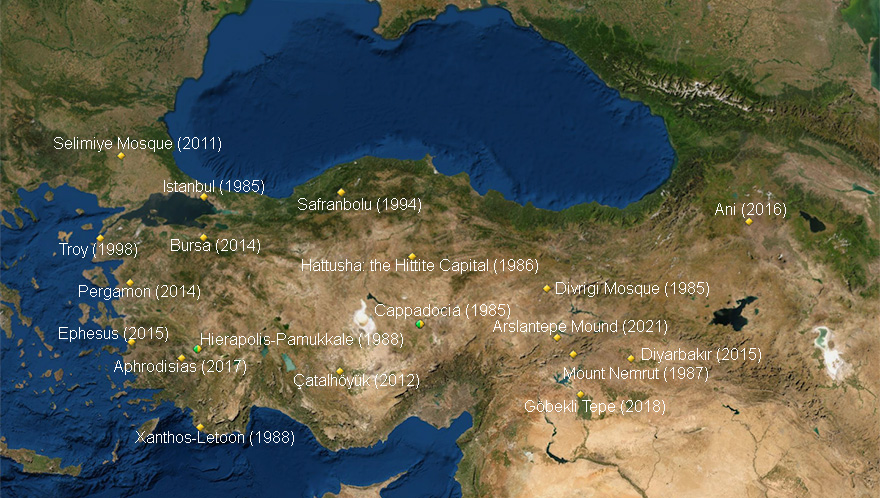 Many people of all religious beliefs may discover a holy site, a temple, a monument, a tomb, or a ruin connected with their religion or belief. Turkey also contains beautiful mountains and valleys, lakes, rivers, waterfalls, and grottoes that are ideal for winter and summer tourism as well as many other sports.

Turkey's World Heritage Sites are places of importance to cultural or natural heritage as described in the UNESCO (United Nations Educational, Scientific and Cultural Organization) World Heritage Convention, which was established in 1972. Turkey became a member of the convention on March 16, 1983, allowing its historical sites to be added to the list. There are 19 World Heritage Sites located in Turkey today, including seventeen cultural properties and two mixed ones.


Below is the list of places that has been inscribed on the Permanent and Tentative List of UNESCO so that you can get an idea about where to go in Turkey:

Places Inscribed on the World Heritage List in Turkey (19)

Great Mosque and Hospital of Divriği

Pergamon and its Cultural Landscape

Places on the Tentative List of UNESCO in Turkey (84)

The Tombstones of Ahlat

The Bridge of Justinian

Mausoleum and Sacred area of Hecatomnus

The Theatre and Aqueducts of Aspendos

Mount Harşena and the Rock Tombs

The Bridge of Uzunköprü

Churches and Monasteries of Midyat