The Blue MosquePlaces to Visit in Istanbul

One of the most famous, Turkish and Islamic art-related monuments in Istanbul is known as The Blue Mosque. Almost every visitor tends to go see it when they come to Istanbul.

The Sultan Ahmet Mosque was built in Istanbul between 1609 and 1616. It is part of a public space that includes covered bazaars, Turkish baths, hospitals, schools, caravanserais and a mausoleum for the sultan. The architect Mehmet Aga studied architecture under Sinan who was one of the greatest architects in classical Ottoman Architecture. 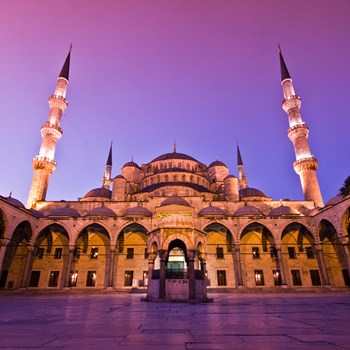 The interior of the mosque has a centralized plan with broad, pointed arches supported by four large columns. It is decorated with over 20,000 exquisite Iznik tiles on the walls and ceilings. The paintwork inside the domes is beautifully designed over gold leafing.

The blue paint on the mosque gives it its name, but the color wasn't always that way. After later repairs and renovations, the original light blue color is back in place.

The floor is covered with carpets everywhere, as in most mosques. Opposite the main entrance there are a marble pulpit and lodge where the sultan would sit during prayer service - to accommodate his height on days. The building's 260 windows offer ample light into the interior space, which holds a dome 23.5 meters in diameter and 43 meters high.

The minarets of the mosque are a classical example of Turkish architecture. They have balconies, and you may reach these by taking spiral stairs. The believers can be called to prayer five times a day from this balcony -- in our day with loudspeakers.