The Alahan Monastery, a complex of fifth century buildings located in the mountains of Isauria in Mersin province, played an important role in early Byzantine architecture. It was formerly called a monastery but some more recent scholarship has contested this attribution and instead consider it to be a pilgrimage shrine.

Construction at this site has taken place over two periods. The first occurred in the mid fifth century under Emperor Leo I while the second occurred in the last quarter of that century under Emperor Zeno. Altogether there are 3 churches, chambers, a baptistery for ritual washing before baptism (communion), living quarters with many other spaces including a forecourt and lower terrace.

There is debate about the original use of this monastery, but it nevertheless became a communal living space for monks and those seeking pilgrimage until the seventh century. Emperor Zeno, who was from Isauria*, took over construction work on the project around 500 AD when he assumed power and may have funded it himself. He often returned to his homeland as a means of retreat, which could indicate that he was interested in completing the project after taking power. 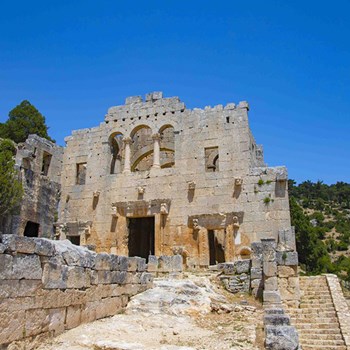 The ruins of Alahan are an example of the Isaurian style in stonemasonry, which was popular during the era before 500 A.D. The region is also known as a key ancient site in Byzantine architecture.

Cave Church : The west end of the site houses a large naturally formed cave. The cave used to be filled with many large rooms but is now practically empty. There is currently one church which sits inside the monastery's cave complex. At its size, it may have been the first of the monastery’s churches to be built.

West Church: The West Church, referred to as the "Church of the Evangelists," is the largest of all three churches in the monastery, with an overall measurement of 36 by 16 meters. The church has a basilica form and is built after the cave church and before the East Church. It is less preserved than either one, but was identified as a service entrance for visitors before it was ever stated that it served for religious purposes. Its' basilica form has 3 rows - a central nave and 2 side aisles.

East Church: The East Church, the best preserved of all the churches, is considerably smaller in size and measures 23 by 15 m. It only has a basilica design but contains a pillar-like tower on its eastern region which was made of light timber tiles. This church is less decorated than the other two because it was only approached from within the monastery. It has only slight adornments on its facade.

Baptistery: Alahan is home to a rare twin-apsed baptistery that was created as the community’s population expanded. A crucifix-shaped pool near the original Alahan cave church likely served as its first baptismal font. Alahan Monastery has been added to the Tentative List of UNESCO in 2000.