CumalikizikPlaces to Visit in Bursa

Cumalıkızık is a village in the Yıldırım district of Turkey, located 10 kilometers east of Bursa. Most of its history goes back to the time when Ottoman Empire was founded and its architecture has well-preserved examples from that period. 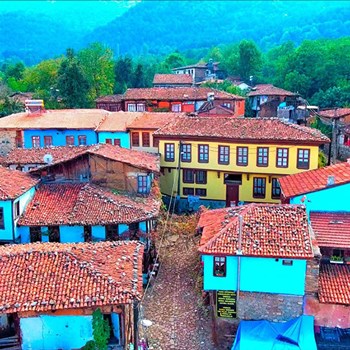 Cumalıkizik is one of a group of 14 villages that end in -kızık. The village was created to provide income for the Orhan Gazi Mosque, which is in the historic city center. The village gained its name because people from the other villages would come to this one for Friday prayers (Cuma means "Friday" in Turkish). Out of 14 Kızık villages, only a handful remain today. These include Değirmenlikızık, Fidyekızık, Derekızık, and Hamamlıkizik - which were the villages that had hamams.

There are 270 Ottoman-era houses still standing and about 180 of those are still inhabited. Many have been restored. These buildings sit on the narrow cobblestones streets with a Middle Ages gutter down its center to channel rain water. These houses are typically two to three stories high and built of wood, rubble stones, and adobe.

Rather than attractions, Cumalıkızık is a place to wander the streets and soak in the genuine old world atmosphere.

This region is rich with historical villages, which are now part of Bursa's UNESCO World Heritage listing.