Kaunos Ancient City and Rock-Cut TombsPlaces to Visit in Mugla

Kaunos is an ancient city with a history of 3000 years located in Dalyan district of Muğla Province. Kaunos, thanks to the rock-cut tombs it has, one of Turkey's most interesting historical sites. In fact Kaunos which was known as an important commercial port city due to its salt production and trade in ancient times that lost its port character as the sea filled with alluvium.

Kaunos was a rich trade hub for the ancient Mediterranean. In addition to basic necessities like salt, dried fish, and figs, Kaunos also produced goods that could be used on long journeys at sea such as building materials and also slaves. No matter how politically powerful they became, most rulers in power wanted this lucrative city as long as it remained in their sphere of influence. 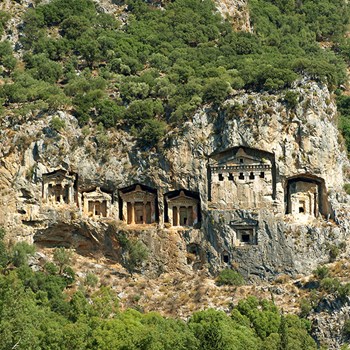 From roughly 500 BC to 600 AD this thriving port city was conquered by different forces multiple times until the Romans took control. The inhabitants abandoned the city around 1500 AD and it fell into ruin, being forgotten for 500 years.

Some of the findings at the ancient city are :

The theater at the Acropolis dates back to second century BCE and is one of the oldest theaters in existence. It can seat 5,000 spectators and features a periaktos – a device that allows for rapid change of scenery (sets) – which may be the earliest form of this invention known.

Monopteros: a dome-shaped building with an open-air roof. Ancient Greeks used a monopteros to view their favorite god in the center. The example found at Kaunos housed a female deity and was around 1st century AD.

A wind-measuring platform that dates back to about 150 BC rests on this building's structure, helping engineers design the city according to the direction of the wind. This tool enabled them to create one maximising airflow and maintain plenty of fresh air for all inhabitants.

Archaeologists discovered an exercise room, a sweating room, a warm-wet room, and a cold pool at the Roman baths in 85 BCE. In the Hellenistic period, there was a long columned walkway where people gathered in an agora to discuss trade, politics and social issues. There were also many statues scattered about that sat on stone plinths.

The most important part of the ancient city is undoubtedly the rock-cut tombs. The majority of the tombs created at Baliklar Mountain in Kaunos are grouped and labeled based on their location. There are seven locations, each proceeding southwest from its previous point. The most significant ones among 167 rock-cut tombs are Temple Faceted Tombs, a unique façade typology seen only in Kaunosian Rock-Cut Tombs of this period. This is why these specific types of tombs have been named as "Kaunosian Style Rock-Cut Tomb," unique to the area and time period they were created.

Kaunos Ancient City and Rock-cut Tombs has been added to the Tentative List of UNESCO in 2014.