The revered religious figure of Saint Nicholas, who was born in Patara in the second half of the third century AD and became a bishop in Myra, elevated his status to saint after his death. Saint Nicholas has become one of the most popular saints throughout European countries, especially those formerly belonging to the Russian Empire. The tradition of Santa Claus, both protector and delight of children in the northern countries of Europe, combined with the existing legend of Saint Nicholas to create a legendary character that appealed to Europeans.

St. Nicholas Church (Aziz Nikolaos Kilisesi) is an important monument of Middle Byzantine art history because it is the most outstanding example of architecture and decoration that originated in the 5th century CE. That fact, along with Myra being capital of the Lycian state at that time and ranking as second-largest religious authority in Anatolia, increased its prestige-especially after Saint Nicholas's death. 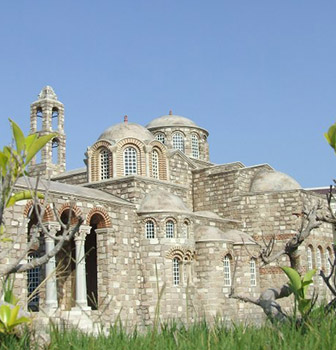 The first church on this site was ruined by an earthquake in 529. A larger basilica-style church was built at the site of the first one following its destruction, and Peschlow thinks that two small residences to the south of its large wall as well as some parts of its northern wall are remnants from the original building.

The church also suffered extensive damage through either an earthquake or at the hands of Arabian raiders in the eighth century. It was subsequently rebuilt, but then, in 1034, it was completely destroyed in the attacks of the Arabian navy. An inscription divulges that the building remained in ruins for a decade after its destruction before being restored by Byzantine Emperor Constantine IX Monomachus and his wife Zoë in 1042. Renovations were made to aid expansion with some additions and rebuildings concluded under Byzantine Emperor Basil II until it reached its current look during this time span.

The Turks controlled Myra in the 13th century and during this time, people were allowed to worship freely at the church. In 1738, repairs were made on a chapel near the main building. C. Texier, who was touring Anatolia from 1833-1837, visited Myra and wrote about it in his books. Lieutenant Spratt and Professor Forbes visited in March of 1842 and drew a sketch of the church.

During the Crimean War in 1853, a group of Russians became interested in the church and purchased land intending to found a Russian colony there. The Ottoman state recognized that this initiative had political ramifications for them and took back the land but acquiesced to demands that the church be restored. In 1862, Frenchman August Salzmann was hired to do the restoration. However his work was poorly planned and violated the original design of the building which resulted in some unfortunate changes such as adding an obnoxious bell tower in 1876 that has survived to our day.

The Saint Nicholas Church in the ancient city of Myra, which was included on the UNESCO Tentative List in 2000, is one of Turkey's outstanding universal values.