The Bridge of UzunköprüPlaces to Visit in Edirne

The Bridge of Uzunköprü

The Uzunköprü (Long Bridge), located about 60 kilometers south of the current city center of Edirne, was constructed on one of the most difficult sections of the Ergene River in Balkans.

The longest historical stone bridge in the world, Uzunköprü spans the Ergene River with Sultan Murad II's command in 1443 and is still used today. It was constructed by head architect Muslihiddin between 1427 and 1443 to span the Ergene river with the aim of Sultan Murad II. With a ceremony attended by the sultan himself, it was brought into use in 1444. It represents a militarily and commercially critical junction linking Edirne to Galipoli as well as Western Rumelia. 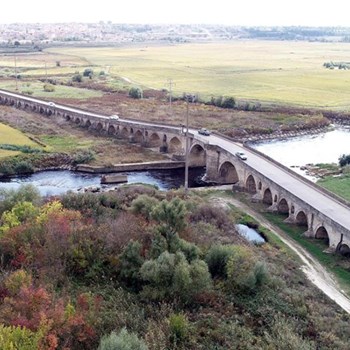 The bridge was constructed of binding ashlar blocks from Yagmurca, Eskikoy, and Hasırcıarnavut quarries brought together with Horasan cement. Ghazi Mahmud Bey oversaw the building process initially, but Ishak Bey took over after his death. Despite its current length of 1238.55 m (4063 ft), from the first arch to the last, it originally had a length of 1392 m (4566 ft) with extended wings that no longer exist.

It took so long to build because the area used to be home to huge marshes in that era. Furthermore, because the Ergene River floods during the rainy season, the arches over the river were built high and feature seven orifices to avoid collapse. The bridge's wings and arches, which have a height of 13.56 m (44.48 ft), are decorated with numerous lion, elephant, bird, eagle, tulip, and geometric relief motifs.

Because it has been subjected to numerous floods and earthquakes since its construction, the bridge underwent several restorations throughout the reigns of Sultan Mehmet the Conqueror, Osman II, Mahmud II, and Abdulhamid II in order to restore the damage. Its breadth was increased from 5.24 meters (17.19 feet) to 6.80 meters (22.3 feet) during a restoration carried out between 1964 and 1971.

The Bridge of Uzunköprü is an excellent example of Ottoman Early Period architecture. It is a magnificent creation that reflects the technical, artistic, and architectural levels achieved during this period as a result of its length, power, and design. The bridge is a concrete symbol of man's impulse to overcome obstacles considered to be difficult.

The original arch number of 174 was reduced to 172 after one of them crumbled in time, and two of them were combined as one. However, the bridge was expected to revert to its original form and be pedestrianized after a fresh restoration and rehabilitation effort are completed.