Uchisar CastlePlaces to Visit in Nevsehir

If you're looking for the highest point in Cappadocia, then it's Uchisar Castle. The fairy chimney was admired for its unique composition and later was shaped to become a natural fortress after losing his head. A climb up the 120 steps to the summit of the castle is an excellent introduction to the mountainous terrain of Cappadocia from where you can see all the valleys of the region. 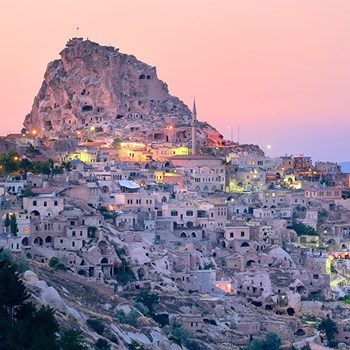 When the Romans, Byzantines and Ottomans ruled this region, Uchisar was used as an early warning system to guard against attacks from higher ground. Ortahisar and Urgup are also located in close proximity to each other, both with histories of defending against invaders. These three landmarks were all situated on high ground that would be advantageous for an invasion and Romans, Byzantines and Selcuks took advantage of these fortresses during their time periods by adapting them into military bases over the years.

Today, the walls of Uchisar Castle have been eroded to reveal a honeycomb structure of tunnels and cavities, leading above the man-made facades in the modern semi-troglodyte village. Previously discovered was a secret tunnel leading to the water supply, giving an emergency life source in times of attack. The castle has two different views: One side showing houses with amazing views from on high and other side having multiple levels of pigeon nests.

The Uchisar Castle is about four kilometers from Goreme and can be reached by using local transportation that departs every 30 minutes. The best time to go to the castle is sunset, when you will have an awe-inspiring view of Cappadocia and a beautiful sunset in one.