Pergamon or Pergamum, was a rich and powerful ancient city in Mysia. It is located 26 kilometers from the modern coastline of the Aegean Sea, northwest of Bergama, Izmir.

The city center is at the top of a large andesite mesa. This meadow slopes away on all sides, but it has three levels making climbing up from the south side possible. On the west side are Selinus River (modern Bergamaçay) and to the east, Ketios River (modern Kestelçay). 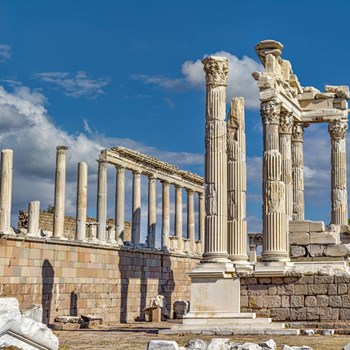 Pergamon enjoyed a pivotal position during the Hellenistic period. The capital of Pergamon (Pergamum) was established after 281 BC, and it became one of the major intellectual centers for Greek culture under the Attalid dynasty in present-day Turkey. Remains from its monuments can still be seen today, including what some believe to be one of the finest examples of architecture: The Pergamon Altar.

Temple of Athena, the steepest theatre of the Hellenistic period, library, Great Altar of Pergamon, Dionysus Temple and agora are among some of the most interesting features in this historical city. The sculpture school that created what has been accepted as one of ancient times' wonders is located here and is considered to be home to some its finest art. The city continued its role as cultural and scientific center in the Roman period. There are many examples of excellence from that time, such as the Sarapeion (Asclepius), Temple of Trajan, theatre, amphitheatre and aqueduct.

The ancient city of Pergamon was added to the UNESCO World Heritage List in 2014.