The ruins of the ancient city of Assos are situated on a rocky hill, on the coast of Aegean Sea. Tuzla river (in ancient times known as Satnoieis) flows to the north of Assos. The remains of the ancient settlement are located on the territory of modern Turkish village and holiday resort, Behramkale.

In the 1st millennium, settlers from the nearby island of Lesbos (now part of Greece) founded Assos. The 4th century BCE was a period of great prosperity for Assos when Hermeias, a student of Plato, ruled the city as well as the rest of Troad peninsula. In 348 BC Aristotle came to Assos and established a school where he taught for three years. 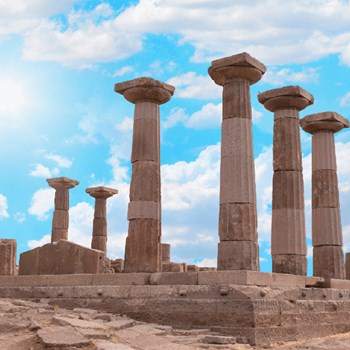 Alexander the Great, a student of Aristotle, expelled Persian troops in 334 BCE and his successors exercised nominal sovereignty over the city.

During the years 241-133 BCE, the Kingdom of Pergamon ruled over Assos. Later on, it was assimilated into the Roman Empire and eventually emerged as a religious center to Saint Paul in 55 AD. Just before his third missionary journey to Jerusalem, Saint Paul walked from Alexandria Troas to Assos alone with no company other than The Spirit in reference to John 14:18 "The Spirit gives life; physical things do not. Those who belong to Christ Jesus have crucified their fleshly selves." There he rejoined his colleagues and sailed off towards Lesbos.

Assos, one of the first western Anatolian cities converted to Christianity in the 5th century AD and listed as an episcopacy in the lists from then until the 14th century. In Byzantine times, it was still an important provincial city for regional and interregional trade.

In Byzantine periods the city was called Machram and it is believed that the modern name of the place, Behram, was derived from Machram. The Turks conquered the area at beginning of 14th century. The harbor never lost its function until 18th century, when it became an important port for trade of cortices of Valonea oaks.

To enter the archaeological site, one must head up and over the hilltop mosque in Behramkale where there is an entrance fee. A walk along Roman walls and a small cistern brings one to 118 m. high acropolis with foundations of Doric-order Athena temple (14 x 30 m.) from 530 BCE. There are 6 original columns left out of 38 that remain. Security measures at the acropolis include 14-m.-high ancient city wall and gate alongside 4th century BCE towers also still intact.

Past the entrance gate is an ancient paved road leading down to a large 2nd century BCE gymnasium (52 x 52 m.) adjacent to ruins of a 5th-6th century church to the northeast, followed by another ancient building complete with Hellenistic period shops and two storey Doric columns.

The ancient bouleuterion (21 m x 21 m) can be found next on the lower road, and after that is a 3rd century BCE Greek theatre for up to 5000 spectators. Outside of the city walls, you'll find a large necropolis containing numerous Greco-Roman tombs dating back as far as 1000 BC.