Aslantepe Tumulus is located in Battalgazi district northeast of the Malatya. The mound dates back to the Chalcolithic period and late Hittite Period. Excavations were initiated by Italian archaeologists in 1932 and subsequent excavation work has been carried out since then. 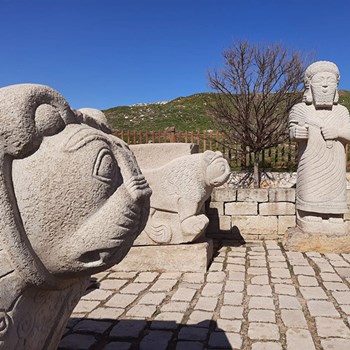 It is one of the ten tumulus covered with piled soil located 6 km northeast of Malatya in Orduzu. It has been a densely accommodated Hittite settlement between B.C. 1900 and 1200. During excavations, traces of ancient times such as Bronze Age and Hittite Empire Era have been found; among these artifacts are palaces belonging to the Assyrian and Hittite rulers which were also exhibitioned at Ankara Archeology Museum.

The extensive excavations of the palace complex offer an incomparable look into the lives of this civilization's first elite citizens through contrasted perspectives and a full understanding of their activities. Archaeologists were able to reconstruct the site accurately, giving insight into life as an elite back when these people were beginning to form a centralized government with control of the economy for their citizens.

The Arslantepe Open Air Museum, which showcases the anthropological and historical achievements of ancient Near Eastern civilizations; illustrates the transitional period in human society. Aslantepe Tumulus & Open Air Museum has been added to UNESCO World Heritage Site List in 2021.