The Nuruosmaniye Mosque is an 18th-century Ottoman mosque in the Çemberlitaş district of Istanbul, Turkey. It was added to the Tentative list of World Heritage Sites in Turkey in 2016. The dome of the mosque is highly distinctive, and it is the fourth biggest in Istanbul, after the Hagia Sophia, Süleymaniye Mosque, and Fatih Mosque, respectively.

The Nuruosmaniye Mosque is part of a wider religious complex, or Külliye, which serves as a cultural center, religious center, and educational institution for the neighborhood. The first imperial mosque of Istanbul, completed in the Ottoman Baroque style, was constructed at Nuruosmaniye Mosque. 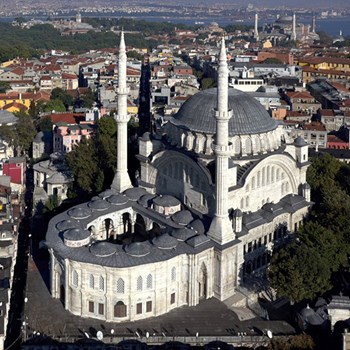 The mosque's muqarnas and its curved courtyard show the influence of the Baroque. The mosque is located on Istanbul's second hill, where Fatma Hatun's mosque once stood; that building was destroyed in a fire. In Istanbul, the Nurosmaniye Mosque was near to the Forum of Constantine, where today stands the Column of Constantine. The Grand Bazaar surrounds the mosque.

The Nuruosmaniye Mosque, also known as the Light of Osman for Sultan Osman III, was constructed during the reign of Sultan Mahmoud I (1748–1754) and completed under his brother and successor Sultan Osman III (1755–1808) in 1755. Its name derives from Osman III's name but also refers to the fact that it has 174 windows that illuminate the mosque's main chamber.

The prayer hall has a single dome 25 meters (82 feet) in diameter and 43.50 meters (142.7 feet) in height, covered with a single dome. The mosque uses iron bracing that runs up from the floor, through the walls, and to the ceiling of the dome. Cut stone and marble were used to create the mosque's materials. "Strain everywhere to melt straight lines into curves" is how the general form of the structure is best described. The complex includes two minarets with two balconies each. The courtyard of the mosque is shaped like a horseshoe, which is unique in Ottoman mosques.

The Nuruosmaniye Complex is a remarkable example of the Ottoman State's political, social, cultural, and artistic achievements in the late eighteenth century. The adoption of a new style in the complex has been deemed as the aesthetic and architectural pinnacle of the period, as well as a flourishing undertaking that mirrored society's socio-cultural changes.

The Nuruosmaniye Complex includes exchange of artistic and technical standards between the Ottoman Empire and Western Europe, as well as cultural fusion and local adaptation of European architectural styles. The complex shows a mélange of experimental ideas alongside conventional tendencies. Baroque motifs are used in public fountains not just after Nuruosmaniye, but also in important buildings and mosques constructed during the Ottoman Empire's 18th and 19th centuries.

Nuruosmaniye Mosque Complex has been listed to the Tentative List of UNESCO in 2016.