The ruins of Priene are located near the town of Soke, Aydin next to a modern village called Gullubahce. Priene is an ancient Greek city, which lies between the popular tourist destinations of Kusadasi and Bodrum. It is close to both Miletus and Ephesus, as well as other ancient sites in the area. Priene may be small, but it has a unique charm that those who visit often come back for more.

Priene was probably founded in either the 11th or 10th centuries BC, but the city’s history and origins are unknown. Although Priene has never been powerful by itself, it's located in a region that frequently witnesses clashes between empires. 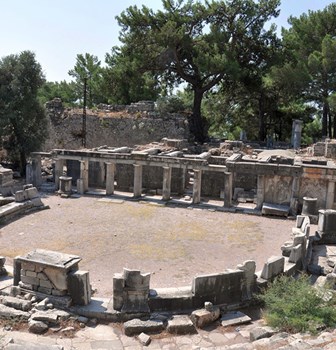 Originally an ally of Athens, Priene was conquered by the Lydians and then the Persians in the 6th century BC. Priene battled in the ill-fated Ionian Revolt against Darius (which would eventually lead to Persian invasion of Greece and their defeat at Marathon) but suffered consequence for rebellion. The city relocated after destruction that prompted one of many relocation events over centuries, and a new foundation was built in 350 BC.

Priene was built on a steep hillside in an innovative grid-pattern design. It didn't have to wait long for its next change of power; Alexander the Great conquered it in 334 BC, and even dedicated a temple to Athena that still stands as Priene's one of the remaining monuments today.

Priene was incorporated into the Roman empire in 89 BC and suffered during invasions by King Mithridates of Pontus in 31 BC. The city recovered to prosper under Emperor Augustus throughout the following century AD.

In the Byzantine period of time Priene became a seat for the local Bishop and an important Christian center. However, after the Muslim conquest, Priene saw gradual decline due to several factors such as slowing coastal and harbour silt which led to abandonment of city in late antiquity.

Visitors to Priene can view the Temple of Athena and the well-preserved Bouleuterion. The site has the remains of a Greek theater, Roman baths and gymnasiums, ruins from an ancient synagogue, and the house of Alexander the Great in which he stayed for a while when he is fighting agains Miletus.

Priene offers visitors an opportunity to explore the ruins of a Hellenistic city that may not be as crowded and bustling with tourists.