Zerzevan, also known as Samachi Castle, is one of the newest archaeological sites in southeastern part of Turkey; official excavation started in 2014. Situated on a hilltop dominating the area, it is located 45 km (28 mi) from the province center and was situated at the easternmost border of Roman Empire where large Roman garrison had control over strategic trade route.

This region was significant for the Parthian and Sasanian civilizations as well. The historical importance of Zerzevan dates back to the Assyrian period around 9th century BC, a time when this site was located on the Royal Road of the Persians who ruled in Asia Minor between 6th and 4th centuries BC. Archaeological evidence shows us that Roman soldiers settled here in the 3rd century AD. On top of a hill, there were also civilian settlements and with an overall population around 1200. The site was inhabited until the 6th century during Byzantine rule, but when the Arabs raided in 639 AD it was destroyed and never rebuilt again. This keeps the buildings intact today though they've been buried for centuries. 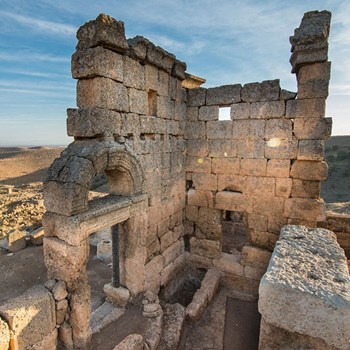 As you walk the higher slopes of this hill, it'll become clear that some parts of these walls were up to 12 meters high and 1.2 kilometers in length. The pathways are sometimes rather narrow and while some portions of the towers remain intact, it’s worth warning people about what appears as more ways to fall from a significant height than climb down from one.

Walking around the site, you will see that there are small and large cisterns used for storing water, canals designed to carry water from springs in the hills into the town during times of scarcity, ruins of a Christian church dating to the 6th century and an underground church constructed in 300 A.D., as well as stone altars. You will also find various types of tombs used by Romans dated between 3rd-7th centuries AD

The most important structure of Zerzevan Castle, Mithraeum, was built on the north end of the walls by carving the main rock into an underground. At the entrance gate of Mithraeum, there are inscriptions and symbols clearly visible. The eastern wall has columns carved into it with two large niches in between two small ones.

The bull sacrifice scene is carved on the plaque in the middle big niche, and you can see paint residues on the belt that rises above two columns around it. Probably there were symbols belonging to Mithras' religion painted on this belt. The crown beam motif of Mithras is also carved into eastern wall.

In one of the smaller niches, there is a bull blood bowl and pool. The bowl and the pool are connected to each other with a channel through the wall, suggesting that water was also used in Mithras religious ceremonies. There are also four symmetrical points on the ceiling for suspending animals during ceremonies—it's likely these hanging points were used during bull sacrifices conducted in a Mithras ritual.

In 2020, Zerzevan was accepted to UNESCO's Tentative List of World Heritage sites and has attracted thousands of visitors due to its popularity as the "mystery religion" of Mithras.