Hacı Bayram-ı Veli, whose real name was Numan-bin Koyunluca Ahmet (or Koyuncu in Turkish) was born in the Solfasol village of Ankara in 1352. He is the founder of Bayrami sect, a sufi poet and composer. Upon completing his education in Ankara and Bursa he started to teach at Karamedrese, an Islamic theological school built by Meklik Hatun. The mosque is located near the Ulus District in Ankara, next to Augustus temple. Originally built in 1427, the mosque as it stands today is a product of styles from the late 17th and 18th century. It has a rectangular plan and sections in the north and west were added later. 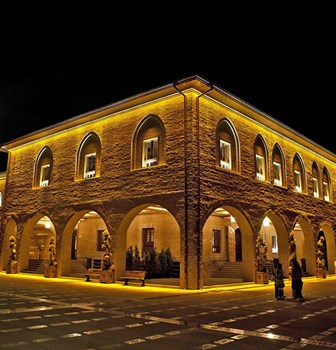 At the south-east side of the mausoleum is a two gallery minaret with a square plan, stone base and brick body.There is an inscription on the protruding southern wall of the late-comer's section that reads “In the Name of God, The Most Gracious, The Most Merciful” (Kelime-i Tevhid) in large Arabic calligraphy. The central hexagonal rosette is framed by six rows of flowered decorations.A smaller version of this rosette can be seen in the rectangular panel on the ceiling of the annexed section to the west, which is separated from the main hall. The edges of these ceilings are decorated with flower patterned cornices and those same types were used in both sections.

Windows on the lower level of the mosque are rectangular with wrought-iron grates. The exterior windows also feature niches composed of pointed arches. Upper windows have pointed arches and stained glass; they are bordered by chiseled marble motifs.On the interior, Kütahya tiles are given up to the height of the windows. After a transition from these tiles to a plain wall with bordering chiselled palmette is made. The Mihrab, a niche in the wall of a mosque indicating the direction of Mecca for prayer, is bedecked with a cross-section of stalactites. The corners are complemented by an elegant inscription from the Koran in five rows on the pediment. The Koran was present on the borders of Mihrab. Colourful Mimbar displays a fine craftsmanship that is made from false "Kundekari" technique. Nakkaş Mustafa is the one responsible for decorating the mosque with its engravings. Two inscriptions on a wall indicate that it was restored by one of the grandsons of Hacı Bayramı Veli in 1714.