The Mausoleum and Sacred Area of HecatomnusPlaces to Visit in Mugla

The Mausoleum and Sacred Area of Hecatomnus

The Mausoleum of Hecatomnus is located on the East side of Hisarbaşı Hill in the Milas District, Muğla. The burial ground is one of the most spectacular archaeological sites in the Mediterranean Area.

The architecture of the Mausoleum of Hecatomnus suggests that it was constructed during the early 4th century BC. It is likely that this mausoleum belonged to Hecatomnus, as burial customs for satraps at the time typically entailed burying their leader within the city center, and Mylasa was still capital at this point. In addition, there are bas-reliefs on his sarcophagus which support Hecatomnus' historical importance in Mylasa and provide an argument for this mausoleum belonging to him because of its location. 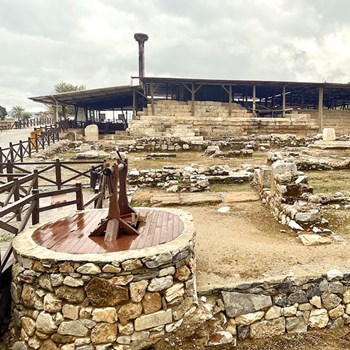 The Mausoleum and Sacred Area of Hecatomnus is composed of: the Temenos Wall, Menandros Column, podium, mausoleum, sarcophagus and dromos.

Temenos Wall: There is a terrace surrounded by temenos walls (10 m in height) with a double row of marble bossage blocks at both the inside and outside that date back to Emperor Augustus' reign.

Menandros Column: A monumental column stands at the eastern edge of a podium. It is dedicated to Menandros and has Corinthian style decorations, yet there may have been a statue also on top of it. The column can be dated back to the reign of Augustus by way of its style and inscription.

Podium (29 m x 36 m x 3 m): The Mausoleum stands on a podium raised five steps above ground level. The exterior wall of the podium was made from rectangular blocks of Sodra marble, which is uncommon to the region. Granite material was used in the interior walls and these are 3m high following the outline with five steps krepis.

The Mausoleum: The tomb consists of three main parts, the Load-bearing Room below to lessen its weight, a Burial or Tomb Room with travertine blocks for each tier and dromos leading to the sarcophagus.

The Mausoleum of Hecatomnus is a precedent to later examples in terms of its architectural design and construction techniques, making important contributions on how to achieve the reconstruction/representation of the burial room of the Mausoleum atHalicarnassus, Bodrum (Tomb of Mausolus) which is one of the Seven Wonders of the Ancient World.