There are 34 underground cities in the Cappadocia region, and Derinkuyu is not just one of these-it's the deepest. Below its surface lies an underground city that reaches sixty meters below the earth's surface. It features all the classical sections of the other underground cities: wineries, stables, storage areas, cellars, refectories and churches. 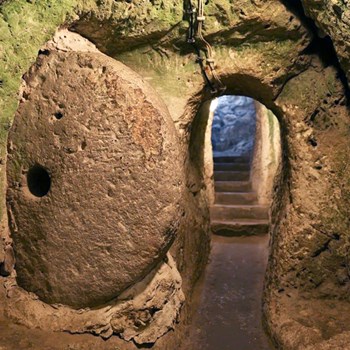 The city has a unique room in the second level used as a religious school during enemy times and peace time. A 100-meter-long tunnel of leads from the third to seventh levels where there is a cross-shaped church, cemetery, water well and at the bottom of ventilation shaft. The underground city has a total of seven levels although not all are excavated. This would have accommodated between 5000 to 8000 people at a time for up to one month.

Derinkuyu Underground City is 40 km far from Goreme center, 50 km far from Urgup town and 55km far from Avanos town. If you would like to visit this place on your own, you can use public buses departing from Goreme bus station. Firstly, you need to reach up to Nevsehir city center and change the bus for Derinkuyu town. It will take over 1 hour to get to the underground city by public buses. It will be same for the guest who are staying in Urgup , Avanos or Uchisar hotels, they need to arrive at Nevsehir city center then they need to catch another bus for the underground city. There is an entrance fee of 60 Turkish Lira per person for the underground city. The GPS Coordinates of the city is 38°22'22.7″N 34°44'01.5″E.