Koramaz Valley is located inside the borders of modern Kayseri Province in central Anatolia. The valley is a fault line that extends for 12 kilometers to the east and west. In the east edge, the valley's base elevation is 1500 meters, while it rises to 1665 meters in the west edge. Some of these streams' waters form their own valleys, whereas others soak into underground waterways and surface as fountains. After meeting each other gradually over time, all of these streams' waters converged at Koramaz Stream.

The region has seven residential areas and some abandoned settlements dating from the ancient period. Pigeon lofts, columbaria, mausoleums, tumuli, underground defense works, caves, temples and churches are still visible in the valley. These buildings date back to the first millennium and have a special significance during Pagan-Christian conflicts in the Roman Empire. The typical design of the valley as well as people's day-to-day lives continues in balance. 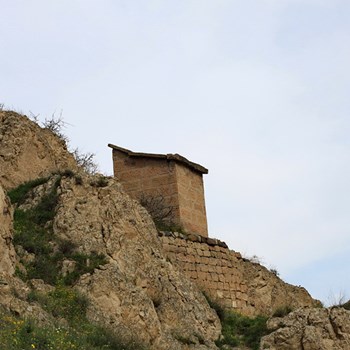 So far, there have been identified 42 rock churches in the region and seven different hamlets in the valley. The biggest of these chapels measures 1.5 by 4 meters in size. They date back to around the middle of the first millennium AD. Afterward, several of them were converted into storehouses and pigeon coops. Only four of them still have frescoes, while others have tunnel vaults with a horseshoe-shaped apsis.

Because of their position on the outbound road and excellent distance to the city center, Koramaz Valley was an ideal burial location. As a result, 21 columbaria - mass graves where non-elite Roman citizens' ashes were kept in special ceramic cups after cremation - have been constructed thus far in Koramaz Valley. 14 of these columbaria feature domed architectural elements. There are at least 100 bays and 200 bays near the end of each columbarium, which are easily distinguished from other grave structures owing to the presence of graveyard niches on the walls.

Collegia were a type of organization that organized these social membership groups. The primary role of collegia was in burial operations. With the transition from Paganism to Christianity, however, these group burial sites lost their significance. These buildings later became pigeon lofts by installing pipes on the ceilings and opening them.

There are hundreds of ancient stone homes as a sample of civil architecture, 6 historical stone bridges, 26 historical fountains, 5 historic watermills, and 5 tumuli dating back to the valley's usage over thousands of years. The majority of the stone dwellings were constructed on top of caves previously used by humans.

Koramaz Valley has been listed in The Tentative List of UNESCO in 2020.