Antalya MuseumPlaces to Visit in Antalya

The Antalya Museum (Antalya Müzesi) was founded in 1922 by teacher Süleyman Fikri Erten to protect the artifacts saved from the pillage of occupation forces following World War I.

The museum was first located in the Alaaddin Mosque (Alaaddin Cami) in Kaleiçi and later relocated to its present building of 1972. The Antalya Museum today consists of 14 exhibition halls on an area of 30 thousand square meters, open-air galleries where sculptures and various artifacts are exhibited, as well as a garden. 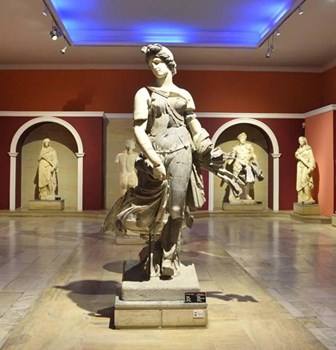 The responsibility region of Antalya Museum is a significant part of Lycia, Pamphylia and Pisidia, three ancient cultural regions that fell under the jurisdiction of Antalya Region. Scientists from different countries, such as Hungary and Bulgaria, conduct annual excavations in Antalya. Antalya is a unique open-air one that's also an International excavation center with its archaeological richness. Numerous salvage projects have been conducted by the Antalya Museum.

The Antalya Museum is an archeological and cultural history museum that also houses ethnographic pieces.

Organized in the halls of the museum, artifacts reflect thousands of years of history in Antalya starting with early human settlements and lasting uninterrupted to modern times. The Antalya Museum is one of the most important museums in the world, especially with its sculptures of Roman Period pieces found in Ancient Perge and interesting and unique finds unearthed from recent excavations.The Council of Europe awarded the museum with the Museum of the Year award in 1988.