The Mount Nemrut Tumulus is located in the eastern part of Turkey. It was built by King Antiochus I Theos of Commagene, a kingdom that had been established in 190 BC on the intersection between Anatolia and Syria. This tumulus is also known as “the Mountain of the Gods” because it contains statues depicting gods from several religions including Greek, Armenian, and Mesopotamian Gods.

This site is between the villages of Sincik, Tepehan, Gerger and Eski Kahta. It has many points of interest to visit. Beyond the entrance of Mt. Nemrut Tumulus is a tumulus made up of small rocks that dates back to the 1st century BC. The circumference of this mound stands at 150m, and its height is 50 meters. The Commagene King Antiochus I constructed this magnificent monument for himself, a grave chamber and holy areas surrounding it on three sides providing perfect views of the sunrise and sunset as well as panoramic views across hundreds of miles.He wanted to achieve maximum impact by constructing a large tomb. 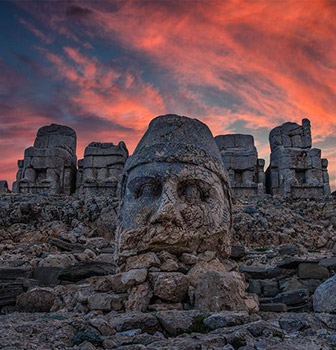 The monument is surrounded by three terraces, on which ceremonies were organized to commemorate the late King. The east and the west terraces have a similar layout with statues of the gods in seated positions.

Antiochus had his own statue placed on top of the row of gods, signifying that he was just as worthy and good as his ancestors.The other statues represent Apollo, ruler of the gods; Fortuna, a blessing and good fortune in Latin; Zeus at center, representing the power of all beings and ruler of the sky; King Antiochus himself.

The lion and eagle are at the ends of each column. These two animals are symbols for power in this world and represent different celestial powers. Each of the statues is several meters high, with headstones measuring at least two meters tall. The figures are mostly headless and scattered around the ground are their heads as well as some of their parts that have crumbled away.

The ceremonial walkway is 10 meters long and leads between the west and east terraces. There are uncompleted steel pillars that were originally 80 meters long.

The gallery of the gods is similar to that on the eastern terrace, but five sandstone reliefs are missing.These monuments have been well preserved and depict Antiochus shaking hands with Apollo, Zeus and Hercules. The names of the gods are written in both Greek and Persian as a show of his claims to both Alexander the Great (Macedonian) and Darius the Great (King of Persia). The faces of the gods were placed to west and east in order to unify his ancestors' cultural differences.

Mount Nemrut has been added to UNESCO World Heritage List in 1987 as a cultural heritage.