Niksar is a district in Tokat province, located on roads from Iran to Central Anatolia, the Aegean Region, Istanbul and many other points. The town's position as a crossroads has made it significant throughout history - the Royal Road coming from Persepolis passed through Niksar and the Black Sea Spice Routes traveled to the Black Sea in Niksar. Kelkit River--rising in Anatolia and ending at then-Black Sea--also contributes to Niksar's significance.

Niksar was the capital city of Danismend Dynasty. Danishmend, a Persian word, means “wise man”. The Danishmenids invited religious scholars and the learned people to their new lands. Niksar became a cultural and scientific center because of this character. Much to Danishmenids's credit, the town was a witness of how Anatolia added not just one but many layers throughout history. 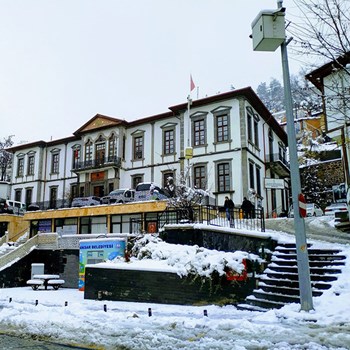 Yağbasan Madrasa is a special part of the rich cultural heritage of Niksar. As the first madrasa in Anatolia, Yağbasan was built in 1157-1158. Thanks to Yağbasan Madrasa, the Danishmendid brought the madrasa institution into Anatolia which has made great contributions to education and science amongst the Muslim community.

Davis Kayseri, a well-known Islamic scholar and founder of the Ottoman Medrese system was educated at Yağbasan Madrasa in Niksar for 12 years. There he completed his first philosophical text work. He founded the Ottoman Medrese System during the rule of Orhan Bey. The building consists of an atrium and two iwans without porticoes.

The Yagbasan madrasa was important in terms of medical education. Thanks to this building, Anatolia reached the most advanced medical science during its time and it was also the first step towards eventual developments that would make Anatolia the most important center for medicinal purposes under Ottoman rule.

Niksar Castle was built in the Roman era and has seen many changes in ownership due to its fragility. The Danishmendid, for example, repaired the castle when it was under their control by adding much of what is now used: a palace, baths, fountains, mosques, Mausoleum and Yağbasan Madrasa to the inventory of cultural structures in the castle.

Niksar has been added to the Tentative List of UNESCO in 2018 with the title of "Early Period of Anatolian Turkish Heritage: Niksar, The Capital of Danishmend Dynasty".