Selimiye Mosque and ComplexPlaces to Visit in Edirne

Selimiye Mosque is the most important and famous Ottoman imperial mosque in Edirne, Turkey. This grand building was designed by Mimar Sinan and built between 1566-1574 for Sultan Selim II, also known as "Selim the Drunkard".

Selimiye Mosque, also known as the Selimiye Complex and planned by architect Sinan, is an ambitious set of buildings in Edirne. It features a mosque, two medreses (theological schools), a covered bazaar, clock tower, many courtyards and a library. All these structures are now officially designated as landmarks on the UNESCO World Heritage List. 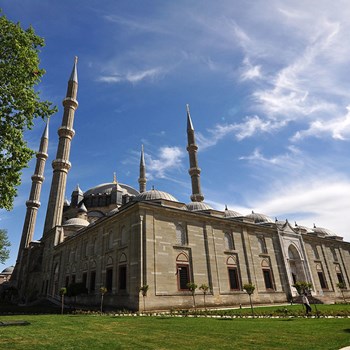 Selimiye Mosque has a gigantic dome and four slender minarets designed by Mimar Sinan, the world-renown royal architect. Architect Sinan, the most famous Ottoman architect in the 16th century, designed the Selimiye Mosque Complex of Edirne to be a work of human creative genius. The single great dome supported by eight pillars has a diameter of 31.5 over a prayer space 45mx36 meters and with its four soaring minarets it dominates the city skyline. The innovative structural design allowed numerous windows that created an extraordinary illuminated interior; this mosque complex was recognized by Sinan himself as his most important architectural work.

The Selimiye Mosque, with its imposing cupola and a dazzling array of architectural detail, symbolizes the Ottoman Empire at its zenith. This sublime mosque also houses a breathtaking collection of Iznik tiles from their peak production period. The Selimiye complex represents the pinnacle example of külliye architecture under the Ottomans.

Four minarets at the northeast, northwest, southeast and southwest corners of each intersection are the tallest in their cluster. Each has three azan platforms under its constellation of three staircases leading to different platforms on the same minaret as well as an independent design feature.