Yildiz PalacePlaces to Visit in Istanbul

Yıldız Palace, meaning "Star Palace", was built in 1880 and was used by the Ottoman Sultan Abdülhamid II. The area around Yıldız Palace originally consisted of woodlands before becoming an imperial estate during the reign of sultan Ahmed I (1603-1617). Various other grand sultans after Ahmed I enjoyed vacationing on these lands, and Sultans Abdülmecid I and Abdülaziz each constructed a mansion here. 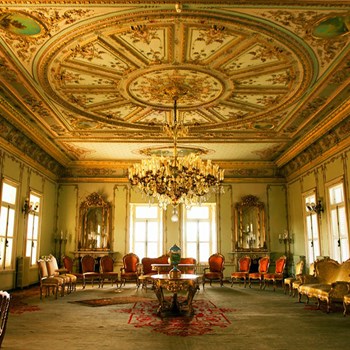 Sometime in the late 19th century, Sultan Abdülhamid II feared a seaside attack on Dolmabahçe Palace, which is located at the shore of Bosporus Straits. He left Dolmabahçe for Yıldız Palace and ordered famed Italian architect Raimondo D'Aronco to build new buildings to his palace complex; thus when he moved there Yıldız became the fourth seat of Ottoman government (the previous ones being two Istanbul Palaces: Topkapı and Dolmabahçe and the one in Edirne, former capital of Ottomans before Istanbul).

The Yıldız Palace is one of the best-known cultural and historical monuments in Istanbul. The palace consists of buildings, including the State Apartments Büyük Mabeyn, Şale Pavilion, Malta Pavilion, Çadır Pavilion, Yıldız Theater and Opera House. Visitors can also see the Imperial Porcelain Factory. A bridge connects this palace to another nearby palace (Ciragan Palace) which contains fountains and statues that reflect Ottoman culture.