The Mamure Castle is housed in Anamur town of Mersin Province, Turkey. The castle is on the Mediterranean coast about 6 kilometers east of Anamur and 216 kilometers west of Mersin. 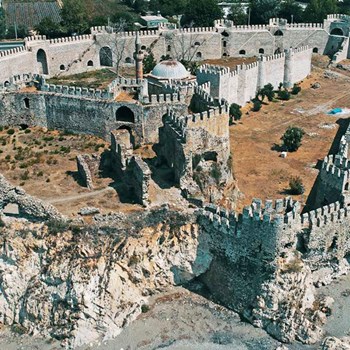 The castle was built by the rulers of Armenian Kingdom of Cilicia on the foundations of a fourth-century Roman castle. The design was to be used as protection against pirates and had been repaired during Byzantine era and under Crusaders. When Alaattin Keykubat I of Seljuk Turks captured the ruins of the castle in 1221, he built a larger fortification using elements from earlier fortifications.

Later this castle was controlled by the Karamanid dynasty, which was a Turkmen principality. According to an inscription from Ibrahim II of Karaman (İbrahim II) in 1450, it is not known exactly when the castle was captured but during Mahmut's reign (1300–1311). The castle was renamed Mamure after repairs by Mahmut. In 1469 it became part of the Ottoman Empire and over time it had 16th century renovations with little additions to some parts.

The castle, which is about 23,500 square meters, contains of 39 towers and bastions connected by wide ramparts. One courtyard in the western section has a small group of buildings that includes a minaret mosque and Turkish bath. The southern section includes a lighthouse remaining as well.