The Underground Water Structures in Gaziantep; Livas and KastelsPlaces to Visit in Gaziantep

The Underground Water Structures in Gaziantep; Livas and Kastels

The city of Gaziantep is located on the banks of the Alleben Stream, which runs along the edge of a hillside. The settlement has been there since the end of the 5th century. The stream meanders through C-shaped settlements. However, Alleben Stream is low in water and is further restricted by rising summer temperatures. A large amount of rainfall percolates underground, and subterranean water is formed as a result. As a consequence of all of this, the city has necessitated the use of waterways.

Gaziantep's ancient water system is made up of subterranean tunnels (livas) that bring groundwater from a distant source to the city, as well as water structures (kastel) that open the water flowing from these tunnels for usage.

Livas' are subterranean water tunnels constructed by humans excavating the limestone rock block on which the city was built. The concept of livas is based on bringing water from a source outside the city to its heart via underground subterranean tunnels, distributing it to big cities through carefully sloping underground tunnels, and delivering it to water structures at designated locations. As the city expanded, additional tunnels were dug to accommodate the expanding population. This resulted in a ‘system of livas' that envelopes the city like a spiderweb for miles and continues for miles. 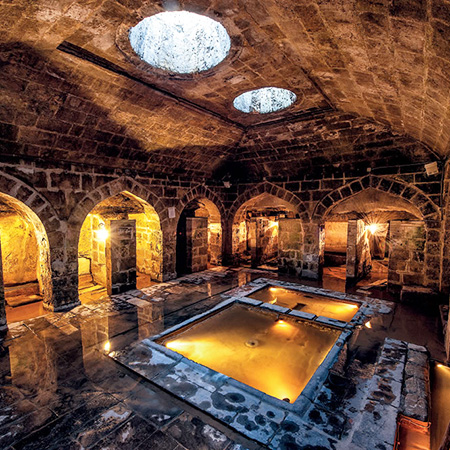 The Pancarlı Livas Line, which transports water from about 14 kilometers northwest of the city, is the oldest livas line. The system's origin and duration of construction have yet to be determined, but it's clear that it has been expanded over time in tandem with the city's expansion.

Kastels are buildings where water from the livas' is made available to the public. Kastels are built at various depths depending on the height of the livas' lines. Instead of employing an extra mechanism, these constructions were constructed at ground level rather than bringing up the water.

Kastels have evolved over time. The oldest ones were fully below-ground kastels; others were partly below-ground kastels. Kastels are architecturally magnificent structures that integrate many functions into their spatial designs, including pools, wells, seating areas, tiny mosques, water closets, and swimming spots. Kastels, in addition to water-related service areas, have become an important meeting place in the city's social life, where people come together, spend time, conduct business and practice religious worship. They were also used to keep us public cool on hot summer days. Only six of the kastels have survived to the present day: Kastel of Pişirici (Beşinci), Kastel of İhsan Bey (Esenbek), Kastel of Şeyh Fethullah, Kastel of Kozluca, Kastel of Ahmet Çelebi and Kastel of İmam Gazali.

Livas and Kastels, some of which are dating back to 12-13th centuries, have been listed in the Tentative List of UNESCO in 2018.