Perge, one of the Pamphylian cities and was believed to have been built in the 12th to 13th centuries BC. Later coming under rule of Lydia and Persia, Perge surrendered to Alexander the Great in 334 BC. The brightest era for this city came during the reigns the Romans between 2nd to 3rd century AD.

Perge has been a popular Christian-tourist destination for years because when Saint Paul travelled the region in 46 AD, he preached his first sermon at the city after coming here from Antioch . Perge is very rich with ancient ruins and archaeological findings that date back to the Hellenistic period. 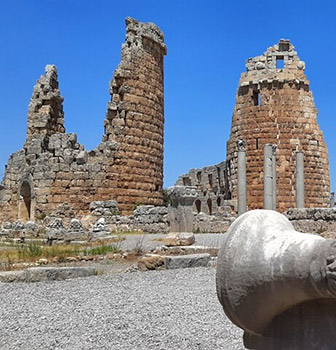 All the remnants of the ancient city can be found in this area. Social and cultural buildings including a theatre and gymnasium are on display as well as monumental fountains, rectangular columned agoras, high towers, and wide stone streets lined with Greek columns. The ancient city of Perge has been part of many civilizations, experiencing both their rises and falls. Some survivors have kept these civilisations memory alive to this day.

Basilica and Baths: The first entrance to the city is the later Roman gate. On the right there is a Byzantine basilica. After the basilica are rows of columns where agora can be found on one side, and on the other there are baths. Among them, Perge has some of Pamphylia's largest and most glamorous baths next to its well.

City Walls: Dating back to 3rd-century BC, the walls of Perge are a symbol of its ancient past. The city is also home to two towers and an ancient gate, which are all Hellenistic in origin. After the Hellenistic gate, there is a colonnaded street with the palaestra to its left. The palaestra is north of the acropolis.

Theatre and Stadium: The theater in far away from the historical site is the first thing you see when approaching Perge. It's behind the theater that stands their this impressive and large stadium, which is one of its principal structures from ancient times; it's also second largest after Aphrodisias Stadium--ancient city of Aphrodisias.

The archaeological site of Perge, included on the UNESCO tentative list in 2009, is one of the outstanding universal values of Turkey.