The Tomb of Ahi EvranPlaces to Visit in Kirsehir

The Tomb of Ahi Evran

Ahi Evran, regarded as the leader of 32 craft and trade types in Turkey, is considered a sage of tanners. He was born near Azerbaijan's district of Hoy - an area now left within the boundaries of Iran. His exact date of birth is unknown; however it can be deduced from the fact that he lived for 93 years and died in 1261 that when he was born it would have been 1171.

After he was educated in Azerbaijan, Khorasan and Baghdad, he moved to Kayseri in Anatolia and established Ahi-order there. After its organization by many cities of Anatolia, he settled in Kırşehir until his death in 1261. 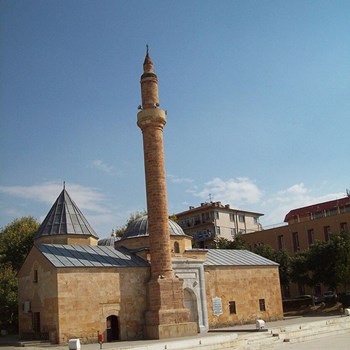 The Arabic word "Ahi" translates to English as brother. It is also the name of an organization that gathers artists and merchants in a single collective, supports them through trade and profession, and holds many similarities with a fraternity or family.

To be a successful Ahi, one must first take an assistant role followed by an apprenticeship. It can take approximately 1,000 days (the equivalent of three years) to complete the whole process and become a master.

Main tenets of Islam heavily influence the organizational structure of this profession's hierarchy, which has been augmented with Muslim beliefs and traditions for centuries in order to keep it relevant.

After being accepted, the craft has been easily spread in the Islamic world. The organization was destabilized at the end of the 16th century due to trouble finding raw materials and consumers for their products as a result of invasion by industrial imports into Ottoman markets. This situation continued until 1861 when a regulation banning monopolies came into force annihilating any obstacle to trade and artisanry.

When the Ottoman Empire fell, guilds were left to die out and activities in Ahi hermitages ended with them. However, the Ahilik Guild returned annually for one week every September under a ministry sponsored event to review their history with celebrations in Kırşehir.

The Tomb of Ahi Evran was built much later by a certain Hasan Bey, an Ahi craftsman in 1450. In 1481 Bozkurt of Dulkadir a bey of Dulkadir Beylik which briefly captured Kırşehir, renewed and enlarged the complex by adding a zaviye (Islamic hermintage). (Both Hasan Bey and Bozkurt of Dulkadir had inscriptions in the complex). The exact place of his grave was predicted only by the location of other Ahi graves. The room was decorated in the 19th century.

The Tomb of Ahi Evran was nominated to the UNESCO World Heritage Tentative List on April 15, 2014 in the Cultural category.