Churches and Monasteries of MidyatPlaces to Visit in Mardin

Churches and Monasteries of Midyat

Midyat is in the center of Tur ʿAbdin, or 'the Mountain of God's Servants' in Syriac. This region consists of a limestone plateau located on south-east Turkey and bordered by the great Tigris River to the north and east, Mesopotamia to the south, and Mardin city in the west.

The rural landscape of Tur 'Abdin consists mostly of Syriac Orthodox villages (about 80 of them) with an estimated 100 churches and 70 monasteries. The architecture dates back to the Byzantine era when the area was ruled by Christians, despite being under Muslim states since 7th century AD. 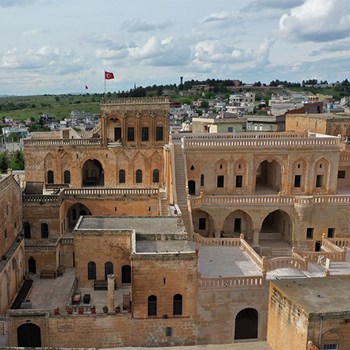 Throughout its history, the city has been influenced by many cultures. Evidence of this can be seen today - people speak Aramaic in parts of the town and buildings have a unique architecture similar to other Syrian Orthodox towns.

With remarkable examples of early Christian monastic architecture dated from the 6th to 8th centuries, Tur ʿAbdin is a unique example of Syriac Orthodox community cultural traditions both past and present. Terraced vineyards, olive trees and the beauty of the southeastern landscape surround this very old site.

Churches and Monasteries of Midyat (Tur ʿAbdin) and Surrounding Area has been added to Tentative List of UNESCO in 2021.