Historic Town of BeypazariPlaces to Visit in Ankara

Beypazarı is a district in Ankara, about 100 km west of the capital. Beypazarı has been inhabited since ancient times, and it preserves emblems of ancient customs with valuable historical and natural assets. Though the territory has changed hands among the Hittites, Phrygians, Galatians, Romans, Byzantine Empire, Seljuk Turks, and Ottoman dynasties throughout history, it was a significant trade intersection on the Silk Road between Constantinople and Baghdad during Seljuk rule and served as the military center of government during Ottoman rule.

The Inozu Valley, located in the north of the city, is a beautiful region rich with natural vegetation and architectural attractions. It has numerous human-made caves on its rocky slopes on two sides, which were used throughout Roman times for housing, churches and graves. These caves are also thought to have served as cenotaphs and built-in rock churches dating back to early Byzantine times when religious services were held. 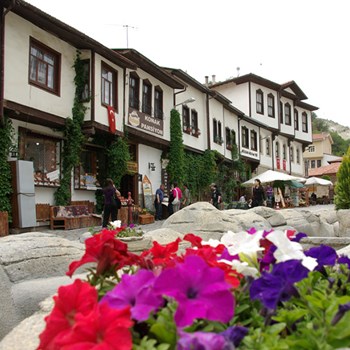 The vineyards and orchards on the slopes of Beypazarı, as well as the wine cellar homes at the bottom of the valley, have emerged as prominent features in local vineyard life.

The region of Beypazarı, which is abundant in water resources including streams, groundwater, and hot springs, was also attractive because of its fertile soil. As a result of this combination of natural environmental factors (climate, hydrology, geology, topography), economic activities (river tribes may irrigate crops) and population (enabling river tribes to irrigated agriculture), the town was formed.

The 200-year-old bazaar, or market, is at the heart of Beypazarı's urban fabric. Shopping centers built in Beypazarı during the Ottoman period became a major marketplace where neighboring cities, towns, and villages met. During that time, the market was one of the largest in the region. In fact, "Beypazar" is derived from "bazaar."

Traditional Turkish houses have a style of exterior, interior, and center plan. The buildings are generally three stories tall. The ground levels are constructed of stone, while the upper levels are made of stone or mud-brick construction. While the ground floors serve a different purpose due to their rocky flooring, the first and second floors constitute the main living spaces, which are designed with far more care and precision. A series of rooms with a sofa in front make up exterior homes. The stairs are generally in the midst of these areas, although they may also be found in the sofas. It appears that a room facing the garden or road has ascended to the front. The small couch is encircled by rooms and service locations, with rooms positioned at angles along the walls. Rooms with internal sofas are on either side of the sofas, while service areas are sometimes not located on this floor. Stairs connect different levels.

The city of Beypazarı is a protected example of Ottoman urbanism from the 19th century. The administrative, ecological (Inozu Valley), aesthetic, economic (bazaar), technological (house design) and sociocultural conditions of the period are all revealed by it. The area includes intact examples of Seljuk and Ottoman religious architecture as well as precious instances of traditional Turkish houses with interior and external spatial layouts, material specialities, structural elements, internal design components, and street textures that work with nature.

Historic Town of Beypazari has been added to the Tentative List of UNESCO World Heritage Sites in 2020.