Vespasianus Titus Tunnel and Beşikli CavePlaces to Visit in Hatay

The Vespasianus Titus Tunnel is located in the Çevlik Ruins area of Hatay, and was built by Emperor Vespasian. The tunnel was created to protect from life-threatening floods and overflows by descending up the mountainside, so he ordered construction of a tunnel that would circle the city and change the direction of currents. Construction started in AD 69 and finished in AD 81 by his son Titus.

The city of Selucia Pieria was an important first century AD port for the Roman Empire, but it had some drawbacks. For one, it was susceptible to flooding and siltation would often render the harbour useless. 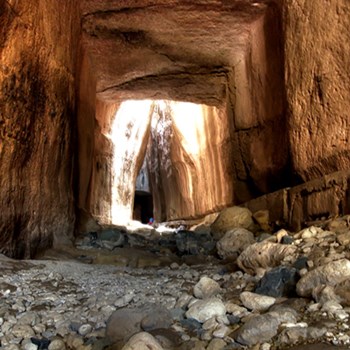 To protect the city and its harbour, Emperor Vespasian initiated a colossal project involving cutting canals and tunnels into hills above Selucia Pieria to stop water from reaching the city. Compared with his other achievement, the construction of Rome's Colosseum, this appears like an achievable task for him.

The project, carried out by Roman Legionnaires and Jewish prisoners, continued under the rule of Emperor Titus (confusingly Vespasian’s first name was also Titus and he named both of his sons Titus) and finally completed by Emperor Antoninus in the second Century AD, though, as Vespasianus Titus Antoninus Tunnel is far too long, Antoninus didn’t get his name included. 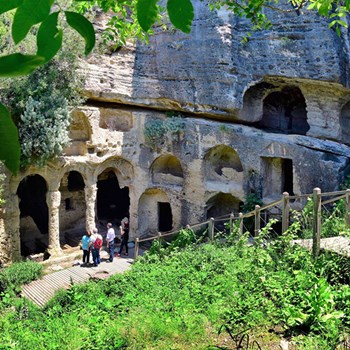 Vespasianus Titus Tunnel, which was initiated by Roman Legionnaires and Jewish prisoners, was completed under the rule of Emperor Antoninus in the 2nd century AD. The tunnel is named after King Vespasian, who gave his name to Emperor Titus and changed it to Titus Flavius Vespasianus when he began ruling as an emperor. The tunnel continued under Emperor Titus (confusingly both their first names were "Titus") but remained incomplete until Emperor Antoninus ruled in the second century AD and finally finished building what became known as the Vespasianus-Titus Tunnel. The 1,380-meter long tunnel cut into the mountain is 7 meters high and 6 meters wide.

Beşikli (Cradle) cave is 100 meters away from the entrance on the sea side of this natural passage and it has twelve rock tombs in different sections. The tombs are separated from each other by walls. These stone tombs are in sections, some of which contain columns and arches built with stone stairs that lead down into the tomb. Columns, capitals, and steps were carved to go along with the doorways where people could enter the tombs which were created when sculptors would cut up rocks.

Vespasianus Titus Tunnel and the surrounding caves and tombs have been on UNESCO's World Heritage Tentative list since 2014.