Van CastlePlaces to Visit in Van

The ancient fortress of Van or Van Castle is a massive stone fortification built by the ancient kingdom of Urartu during the 9th to 7th century BC. It sits at the top of a steep-sided bluff overlooking Tushpa, the old Urartian capital.

A number of fortifications were built in different regions of the Urartian kingdom, usually at places where modern-day Armenia, Turkey and Iran meet. Successive groups such as the Medes, Achaemenids, Armenians, Parthians, Greeks, Sassanids, Persians, Byzantines, Arabs, Seljuks, Ottomans and Russians each controlled the fortress at one point or another in time. 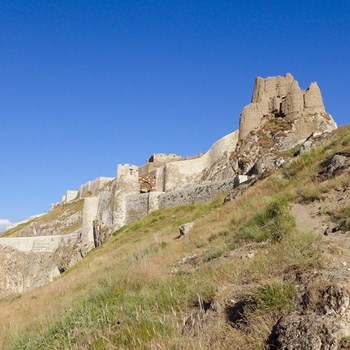 The walls of Van Castle are built with a mixture. Higher sections were made from bricks, while lower parts were primarily constructed of basalt.

This mountain fortress identifies itself in a large rock-carved "royal stable" of 20m length, 9m width and 2.5m height. The environment within the Urartian gods is evident by discovery of inscriptions that reveal how animals were sacrificed to honor them.

A huge inscription of Xerxes the Great from the 5th century BC is inscribed on a smoothed section of rock face, some 20 meters (60 feet) above ground near the fortress. The niche was originally carved out by King Darius but left it blank. The inscription survives in near perfect condition and spans 3 columns of 27 lines written in Old Persian, Babylonian, and Elamite.

The Old City of Van and The Fortress of Van has been added to the Tentative List of UNESCO in 2016.