Sultan Bayezid II Mosque and ComplexPlaces to Visit in Edirne

Sultan Bayezid II Mosque and Complex is one of the highest achievements in Ottoman architecture. It consists of a mosque, guesthouses (tabhanes), madrasah (school), hospital, soup kitchen-cellar for food storage areas.

The main center of the complex is the darussifa (hospital) and madrasa (medical school). The other constructed units were built to complete the hospital service in social, cultural, religious and financial aspects. Bayezid Khan Bridge over the Tunca River connected the complex with the city.

The construction of this building started in 1484 by order of Sultan Bayezid II. Scholars disagree on who the architect was, unsubstantiated claims are given by both Hayrettin and Yakub Shah, but most believe it to be designed by Hayrettin, who is known for constructing many important structures under Bayezid II. 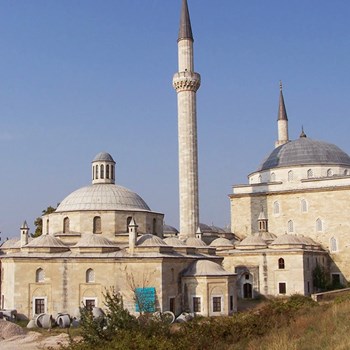 Darüşşifa is one of the best examples in the early modern period Islamic world and in Europe for transformational attempts towards a “central system.” It consists of a hexagonal treatment area covered by a large dome at its center, with medical units located around two courtyards connected to each other. This enables providing optimum provision of medical services. Darüşşifa played an important role in providing protective services. The smallpox vaccine applied to the children at Darüşşifa was taken to England by Lady Mary Wortley Montagu who visited the Ottoman Empire and started applying the vaccine as well.

The Sultan Bayezid II Complex, with its central planning system for ventilation, lighting details, polyclinic (outpatient) section and inpatient facilities as well as a laboratory and storage rooms with acoustic system is considered the forerunner of modern hospitals.

The mosque occupies a central location in the complex. It is a domed building and has an impressive dome measuring 20.55 meters in diameter that sets it apart from other single-domed mosques. Unlike most mosques, this one does not have any foot-column system but instead places the dome below on top of its walls directly. The marble architecture of the mosque leaves a classical, serene internal space. The mahfil (gathering place) for the sovereignty is built on large columns made out of marble and located to right side of the mihrab. The woodworking on the interior doors and windows has been made with care as proof by its beautiful design.

Sultan Bayezid II Mosque and Complex has been added to the Tentative List of UNESCO in 2016.