Ancient City of TroyPlaces to Visit in Canakkale

Troy, the world’s most famous archaeological site and modern archaeology's starting point, is a great example of an oriental city in an Aegean context.

The site of Troy has first been occupied in the early Bronze Age and went through many phases. At its height, it was one of the most significant towns in all of Aegean with an important role as a trading hub.

Troy II and Troy VI are both characteristic examples of the ancient city, with a citadel that enclosed both palaces and administrative buildings. The lower town was also fortified in pre-Hellenistic periods. These structures are all directly associated with, or referenced by, universally significant literary works such as Homer’s Iliad and Virgil's Aeneid. Hellenistic tombs were erected over the burial sites of those who fought to save Troy (Achilles, Ajax), those who tried to take it from behind enemy lines (Hector) but also servants of Trojan leaders like Patroclus). 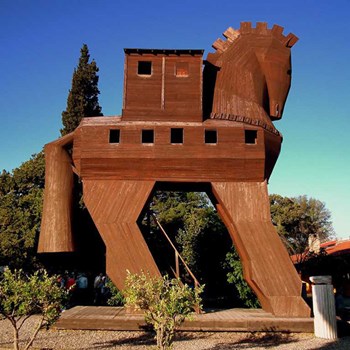 Terrible earthquakes struck Troy in 1350 BC, but the town quickly recovered and was rebuilt in a more orderly layout. It was devastated again in 1250 BC by widespread fire and mass slaughter. These events led some scientists to identify this phase as Troy VII, which ended with the city besieged during the Trojan War of Greek legend. Realizing that these disasters were actually caused by intense commercial rivalry between Troy and Mycenaeans, who sought control over trade routes leading through Europe from Asia Minor's Black Sea Region.

Troy, the legendary capital of a league of cities in the Troad during 306 BC, prospered under Roman rule and was reoccupied again by the Byzantines. It remained populated until these areas came into Ottoman control in 1402.

Legend of Troy: Long ago, according to legend, Tethys and the Titan of Atlantic Sea, Oceanus had a daughter called Electra. Electra would become Zeus' wife and give birth to Dardanus. The descendants of Dardanus founded the city called Truad which later became Troy.

The discovery, exploration and excavation of the site is generally traced back to 1793. Heinrich Schliemann first visited in 1868 and was not able to finish his work until 1893 after declaring seven major campaigns to be complete. In 1873 he found gold treasure, some falsely labeled as "King Priam's Treasure" even though it came from Troy II rather than Troy VIIA.

More than a century of excavations have uncovered 23 portions of the city's defensive walls, eleven gates, a paved stone ramp, and the lower sections of five citadel fortifications. The majority date from Troy II and VI; however, there is also one section that dates from the earliest era (Troy I) near South Gate No. 1.

The great residential complex from Troy II consists of five buildings with porches that parallel each other, the most prominent being considered to represent a prototype of Greek temples. The ensemble is believed to have been some form of palace; among its remains are long rectangular houses from Troy II located at the bottom of an excavated trench called Schliemann's Trench by 19th-century excavator Heinrich Schliemann when he searched for 'the Citadel of Priam', which he never found.

Troy’s Greek and Roman cities are primarily represented by the sanctuary complex. Along with two other public buildings, Roman urban organization is reflected in this complex's architectural design, which includes an odeon (concert hall) as well as tiers of seats made from limestone blocks.

Troy is listed as a UNESCO World Heritage site in 1998. In addition to Troy, there are many archaeological sites nearby and scattered throughout the landscape.