The Basilica of Saint JohnPlaces to Visit in Izmir

The Basilica of Saint John

Historically, it is believed that the evangelist of St. John spent his last years in Ephesus and buried near Ayasuluk Hill. As a result three hundred years after the death of St. John, a small chapel was constructed over his grave during the 4th century. His grave, originally a small chapel, was converted into a magnificent basilica under Justinian the Great (circa 527 -565 AD).

Saint John started following Jesus when he was with his brother at the Lake Galilee. He grew to be one of Jesus Christ’s closest disciples and many significant events were attended by both him and Jesus such as incident of Transfiguration, Crucifixion and other occasions. The Apostle John was the writer of the Fourth Gospel and The book of Revelation. When Jesus Christ was on his cross’s stake he told his Mother and to his beloved disciple that ‘this is my mother/ this is your son’. (John 19:26-27) The beloved disciple is thought by scholars to be St John. 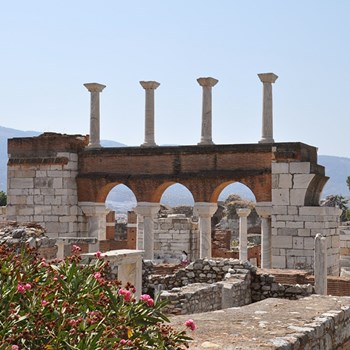 The first century had seen many Christians killed for their faith. In the second half of that century, Apostle James and Stephen were both killed in Jerusalem. Paul was sent to Rome and executed there. It is said that John took Mary The Mother (Mary) and came to Ephesus with her - he wrote his Gospel in Ephesus, according to tradition, and Revelation on Patmos Island near Greece 96AD.

The basilica in the shape of a cross with six domes was constructed using stone and brick designs that are uncommon for its time. The tomb of St John is under the central dome, which once carried four columns on each corner. Two steps exist now over the main entrance to the basilica; these were used before people walked on marble floor and are still found today at entrances within churches that Justinian I dedicated to his wife Theodora.

Constructed in the 5th century AD, the baptistery is north of the nave. Rampart walls around this church were designed to protect from Arabian invaders and are a 7th - 8th century design. The impressive 10th century frescoes represent scenes of St John, Jesus and a Saint. The chapel was used as mosque in the 14th century following an earthquake that rendered it unusable.