GobeklitepePlaces to Visit in Sanliurfa

Göbekli Tepe is a Neolithic archaeological site near the city of Şanlıurfa in Southeastern Anatolia, Turkey. Its oldest layer dates to around 9000 BCE during the Pre-Pottery Neolithic A. Klaus Schmidt discovered the site and excavated it between 1995 and 2014.

The Pre-Pottery Neolithic B (PPNB) layer, dated to between 8300 and 7400 BCE, is the younger layer of Gobeklitepe. In this phase of construction, an earth embankment with a monumental T-shaped stone was erected at its edge. 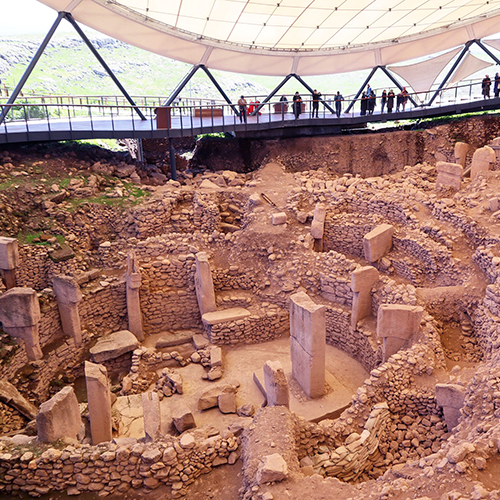 The T-shaped pillars are believed to have been used in connection with social events and rituals. There are also abstract depictions of human forms, as well as detailed images of animals from the wild. More than 200 pillars- each with a height of up to 6 meters and weighing up to 10 tons- have been identified through geophysical surveys. These pillars are fitted into sockets that were hewn from the bedrock.

The people who built the megalithic structures at Göbekli Tepe, one of the earliest monumental buildings in human history, early humans evolved from primitive hunter-gatherer societies to farming communities. These innovations show how creative and interconnected these Pre-Pottery Neolithic cultures were.

Göbekli Tepe is the earliest known evidence of monumental human-made architecture so far. The site features a large number of limestone pillars, many decorated with the stylized image of a T, and archaeoastronomers believe these also served an astronomically aligned function, as well.

Gobeklitepe has been declared as a UNESCO World Heritage Site in 2018.