Zeugma is a city in Belkis Village, located 10 kilometers (6 miles) east from Nizip/ Gaziantep by the Euphrates River. The importance of this settlement which has been inhabited nonstop since the prehistoric era is that it is one of two points on either side being an easy passage across the Euphrates. This trade center existed during Hellenistic Era and was important for establishing its place as one of the greatest cities in Anatolia through its position over both land and river transportation at different periods throughout history.

When Rome started to rule the region, Zeugma's importance increased due to the settlement of a military garrison called 4th Legion. Because art activities also were improved in parallel with progress in trade volume at that time, a cultural development situation was achieved in Zeugma. Due to recent discoveries and excavations, archaeologists discovered many Roman villas with beautifully-decorated floor mosaics. 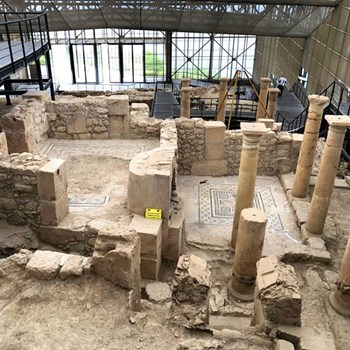 The archaeological site of Zeugma drew the attention of visitors from all over the world with its unique mosaics depicting many Greek mythology gods including those featured on a pool floor, parts of dining halls, and some rooms. This ancient city has experienced many excavations. In 2000, the ruins of Zeugma were flooded by Birecik Dam.

On May 7, 2000, half a year before this flood, America's patron David W. Packard read about Zeugma in New York Times and spontaneously decided to support an emergency excavation. He immediately hired English company Oxford Archaeological Unit under the direction of Robert Earley for finding mosaic specialist and French team to rescue most precious artefacts from lost souls in every corner of what once was beautiful old town on the Euphrates River. Under pressure, 60 archaeologists and 200 workers labored alongside one another to work on three excavation areas, thanks to a budget of five million dollars.

Initial priority was given to salvage and documentation in Zone A that disappeared under the dam waters early July 2000. The archaeologists then moved over to Zone B, scheduled for subsisting in October 2000 when the water reached its maximum level. Zone C consists of the higher parts of the city that have not been affected by the dam. As a result of these frantic emergency excavations, conducted from June to October 2000, 45 mosaics were found. Twenty two of them were almost intact and nicknamed "the second Pompeii". These mosaics were first exhibited in the Gaziantep Archaeological Museum, but as of May 2011 the Zeugma Mosaic Museum was opened.