The Basilica Cistern was built during the reign of Justinian I (527-565) to supply water to the nearby palaces. There are 336 columns, which are arranged into 12 rows with 28 each. The cistern measures 140 by 70 meters and includes capitals on top that vary in style from plain ones to Corinthian types. Depending on the season, the level of water in the cistern would fluctuate. The pipes were located at different levels on the eastern wall. 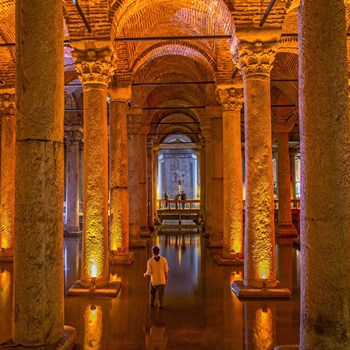 One of the largest and most magnificent covered cisterns in Istanbul is accessed through a small building to the west of Hagia Sophia Square. The ceiling, made entirely out of brick, is cross-vaulted like a forest full of pillars. It's called as Basilica Cistern, because at one time it was functioning as a basilica. There are 336 ancient columns in the cistern, with different-shaped capitals.

The cisterns were built by Justinian (527-565 A.D.), because there was a water crisis in Istanbul and churches couldn't be provided enough water for daily needs. This large cistern served many palaces of the Byzantine age as well as a mosque until the 17th century.

During a major restoration in 1987, over a meter of mud was removed. The original brick pavement and two Medusa head statues were revealed. These days visitors can walk around the cistern thanks to the new walkway.