Great Mosque and Hospital of DivrigiPlaces to Visit in Sivas

Great Mosque and Hospital of Divrigi

The Great Mosque and Hospital of Divriği is an impressive monument combining a monumental hypostyle mosque with a two-storey hospital. The mosque has a hexagonal pointed tip roof that covers its prayer niche, which is located on an ablutions basin near the center of this large prayer hall. There are intricately carved monumental stone portals located on both north and west sides.

Inside the building, four rows of four piers create five aisles roofed by intricately carved stone vaults. The adjoining hospital, the Darush-shifa (Turkish for ‘house of healing’) was founded by Ahmet Shah’s wife Turan Melek and designed by the architect Hurrem Shah, in 1228-1229. It is entered via an elaborately carved stone portal on the west into a double height atrium formed by four massive piers supporting a dome with an oculus over a central pool around which are located the hospital rooms. 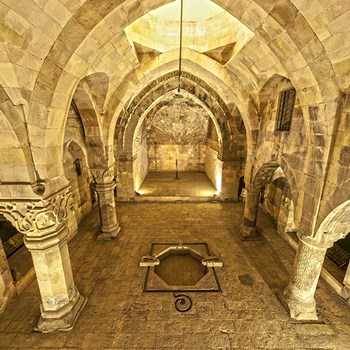 There is an interesting detail in the shadows of both entrances to this mosque. One of them is a man praying with his head down that changes position to illustrate possibly how using the mosque. Another interesting point in it's design is the fact that there are two different people represented with their own clothing, with the purpose of telling which door someone should enter through depending on how they dress. Structures built with tessellations to make it look like there is a picture on the wall were approved for Islamic design, but strictly painting or designing pictures are not allowed in Islam. So, in this building by using tessellations, the architect has made a creative escape.

The hospital is accessed through its western-facing entrance, comparable to the mosque’s north-facing portal. The stone carving here isn't as dense as the main building but appears unfinished in some places. The interior of the hospital consists of rooms and iwans arranged around an open courtyard with a small pool at its center. The hospital has a second story on the southern side which is reached by a staircase inside the entrance. The room served as both a dynastic tomb chamber and an opening to the mosque.

The Divriği Mosque is an outstanding example of a Seljuk mosque in Anatolia, as it neither has a courtyard, colonnades nor an uncovered ablutions basin, but rather organizes all religious functions in an enclosed area, owing perhaps to the harshness of the climate. A charitable foundation, the contiguous hospital makes an already exceptional ensemble even more interesting, thanks to a princely command.

The Great Mosque and Hospital of Divrigi has been added to UNESCO World Heritage List in 1985.