The Historic Town of Iznik (Nicaea)Places to Visit in Bursa

The Historic Town of Iznik (Nicaea)

The historic town of Iznik, which sits on the shore of brackish Lake Iznik in northwestern Turkey, is 77 kilometers northeast from central Bursa and so within easy day-tripping distance from the city.

An important city in early Christian history, İznik (known in ancient times as Nicaea) was the site of the First and Second Councils of Nicaea. These councils established key tenets of Christianity such as the Nicene Creed and sainted how Christians should interact with icons. 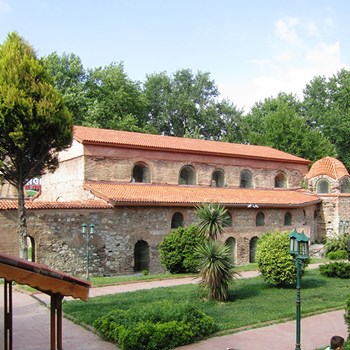 The city became notable in 316 BC when one of Alexander the Great's generals claimed it. In the 11th century, Seljuk Turks made İznik their capital for a brief period, and Byzantine emperors-in-exile did the same in the 13th century when Constantinople (now Istanbul) was under Crusader rule. The Ottomans captured İznik in 1331, and its popularity grew with production of colorful tiles that are unrivaled to this day.

Visiting this town for a site-seeing vacation may not appeal to some, but those in pursuit of older remnants of Western culture will be delighted. The remains are firstly the preserved segments of the Roman-Byzantine walls that wrapped around the entire town. Visitors can also still see various portions and gates from these embattlements such as the Istanbul gate in the northern section of town.

The Aya Sofya, a church converted into a mosque in the Justinian era, still has some preserved mosaics and frescoes inside of it.

During the Ottoman era, Iznik became known for creating remarkable tile art that was used in many of the most famous mosques in Istanbul and other cities.Today, the town's ceramic industry has been revived and there are shops in the center of town where visitors can browse for handmade tiles and other crafts.