Sardis was a city that was situated in the middle of Hermus valley, at the foot of Mount Tmolus, a steep and lofty spur which formed the citadel. Approximately 4 kilometers (2.5 miles) south of Hermus River is where Sardis is located today, near modern day village Sart in Salihli province in Manisa, Turkey. The part of remains that are open to visitors include bath-gymnasium complex buildings with synagogue and Byzantine shops nearby.

Sardis was the capital of the ancient Kingdom of Lydia, ruled by King Croesus. He was famous for his wealth and became the last king of Lydia in 560-546 BC. Sardis, the capital city of a native Iron Age Anatolian people was part of an empire that encompassed most western Anatolia during the seventh and sixth centuries BC. The Lydians were conquered by Persian in 547 BC. 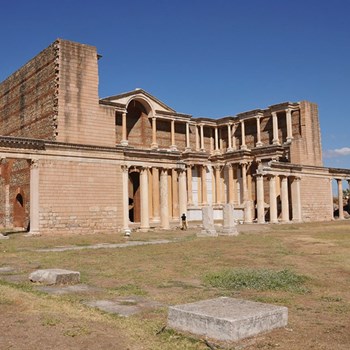 The Greek city of Sardis was captured in 330 BC by Alexander the Great. Although he left the former customs in place, He gradually converted the Lydian capital to a Greek city with the best known for its temples such as that of Artemis, famed as one of the four largest Ionic temples at any point in history.

During the Roman occupation of Sardis, the city's remaining splendor made for an impressive home for the imperial cult. Along with monumental avenues and public baths, citizens built a synagogue that remains the largest in ancient times.

In the fourth century, Sardis became an increasingly important Christian center with the site of one of the Seven Churches of Revelation. Alongside its founding as a Lydian city in the middle or towards the end of sixth century BC, Sardis constituted a city with rich heritage that included being home to those influential in minting coinage and housing many Christians and Jews.

A Lydian industrial sector outside the city walls, which preserves the earliest evidence in the world for refining gold and silver from electrum. The Lydian fortification, which enclosed the city with a massive defense 20 meters wide at its base and preserved to a height of 10 meters (larger than any other defense work in Anatolia), well-preserved houses dating to both late Roman and Lydian times, natural terraces made by ancient builders and acropolis with remains from both Lydian-age buildings as well as major Byzantine fortifications.

Other notable attractions at Sardis include the Temple of Artemis, an ancient Roman bath-gymnasium complex with its monumental columned marble court, a sanctuary for Roman Imperial cults, and adjacent theater and stadium. There were also remnants of a synagogue which was the largest in the ancient world; after that, there are Byzantine shops and burial tombs.

Sardis was a preeminent city of the ancient world, capital of an empire that ruled western Anatolia and the home of Croesus, whose name became synonymous with unimaginable wealth. Sardis Ancient City has been added to the Tentative List of UNESCO in 2013.