Medieval City of Beçin Places to Visit in Mugla

Beçin is situated 5 km south of the Milas District, in the Muğla Province, southwest of Turkey. Beçin was not a prominent city in ancient times or during the Byzantine period.It came into prominence and became the capital city of Menteşeoğulları in 13th century, lasting for more than 200 years with their dominance over Muğla, Balat, Milas, Beçin, Çine Tavas and Köycegiz.

Beçin City, a fortress and the main settlement area in the south of this fortress, constituted an important part of Beçin for centuries. Kızıl Han, Kara Paşa Han and Emir Courtyard are all found within its walls as is the Orman Lodge, New Church and Byzantine Chapel. There are also countless archaeological remains found on site. 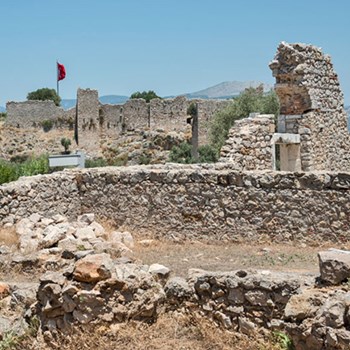 The most prominent structures in the city are 1) The Inner Citadel; 2) a set of numbered tombs (with their corresponding numbers); 3) Big Hamam, Zaviye and the Mültezim House, 4) Orhan Mosque, Hankah and Ahmet Gazi Muslim Jamaka. 5) bey Mansion and Bath, 6) Domed Fountain, 7) Kızılhan; 8 Seymenlik Zaviye and Menteşe Cemetery. Most of these structures date back to the 14th and 15th centuries except for the citadel, which was built from older ruins.

In 2000, a hoard of coins was found at the archaeological site of Beçin. The cache consisted of 60,000 Islamic coins and 850 European coins, which are among the largest hoards ever discovered in Turkey when coming from an archaeological excavation.

Beçin, which was the capital city of Menteşeoğulları Sultanate and is located in modern-day Turkey, contains evidence of Turkish cultural history. In terms of its geography and architecture Beçin provides a window into the Western Anatolian culture from centuries ago, as well as into archaeological discoveries dating back to the first Turkish settlements west of today's Turkey.

The medieval city of Becin has been added to the Tentative List of UNESCO in 2012.