Safranbolu is an Ottoman city that has withstood the test of time. It displays some interesting interactions between the topography and the historic settlement. Safranbolu’s key role in trade by virtue of its pivotal location along many caravans led to great wealth. As a result, it set a standard in urban development which exercised significant influence over wider parts of Ottoman Empire congruent with this public and private architecture. 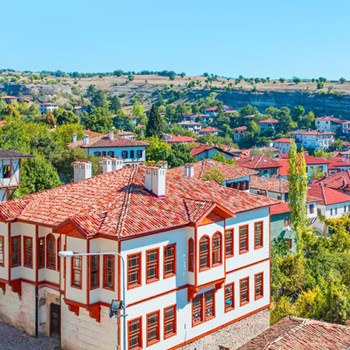 The area was first occupied by humans in antiquity, evidenced by rock-cut tombs that date back to prehistory. Turkish People conquered the town during the 11th century and it quickly grew into an important city on the main east-west trade route thanks to its position along those routes. Surviving buildings from this time include Old Mosque, Old Bath, and Suleyman Pasha Medresse, all built in 1322 AD.

The caravan trade reached its height in the 17th century, and many buildings from this time are still standing. These include the Cinci Inn with it's 60 guestrooms (1640-48), Koprulu Mosque (1661) and Izzet Pasha Mosque (1796). There are also many stores, stables, and baths.

The Old Town preserves many old buildings, with 1008 registered historical artifacts. These are: 1 private museum, 25 mosques, 5 tombs, 8 historical fountains, 5 Turkish baths, 3 caravanserais, 1 historical clock tower, 1 sundial and hundreds of houses and mansions. Also there are mounds of ancient settlements, rock tombs and historical bridges. The Old Town is situated in a deep ravine in a fairly dry area in the rain shadow of the mountains. The New Town can be found on the plateau about two kilometers west of the Old Town.

The name of the town derives from ‘saffron’ and the Greek word 'polis' (city), since Safranbolu was a trading place for saffron. Today, saffron is still grown at Davutobası which is 22 km east of Safranbolu and probably one of the best quality saffrons in the world.