The city is located on south-facing slopes between 1,450 and 1,600 meters above sea level. The surrounding valleys were gradually incorporated in the area of the municipality. Sagalassos was conquered by Alexander the Great in 333 BC on his way to Persia and flourished after joining the Roman Empire in 25 BC. It was linked to the Anatolian road network and connected with Lycia's coastal cities, most importantly those of Ionia. 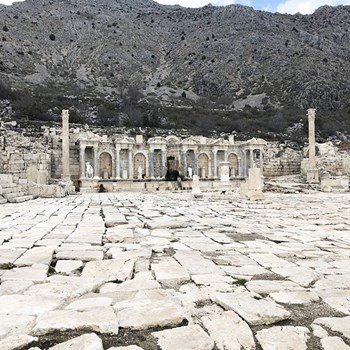 In antiquity, Romans exported pottery and agricultural products through the city. After Alexander's death, the region was governed by Antigonus Monophthalmus, Lysimachus of Thrace, or the Seleucids of Syria.

For centuries, Hellenization and Roman rule influenced the architecture of Sagalassos. Construction in this ancient city ceased from 235 to 4th century CE, but then administrative developments occurred that led to a new change in customs, and building resumed after 368 CE. Locals were less involved with the running of the city than before, and religious shifts caused many changes in architectural style in later years.

Three major events in the sixth and seventh centuries led to Sagalassos' gradual decline: an earthquake each at the beginning of each century, and a plague epidemic in 541-542. Even with these three devastating events, residents still remained in Sagalassos; they mainly lived off of agriculture; only by 13th century did they disappear. At that time, Ağlasun had emerged as a neighboring town; just like those who abandoned Alexander's Hill before them, Seljuk Turks arrived there by 1200 and conquered what was left.

Sagalassos, which can be found in Ağlasun today as well, went through many different periods of prosperity and decline. In the 13th century a caravanserai and hamam were established near the town's square; this area served as a thriving commercial center during the 16th century when it hosted a regionally significant market.

The site of ancient city, which covers 450 hectares has been excavated since 1990 by archaeologists from the University of Leuven in Belgium. The finds feature a huge Roman bath complex, library, urban mansion with more than 80 rooms, and theatre with seating for up to 9000 people.

The most amazing found in the ancient city is the fountain of Antonine. The fountain was built between 161-180 AD, a time of Roman prosperity when Emperor Marcus Aurelius ruled. The excavation took place from 1993-1995. Repairs were started in 1998 and completed in 2000. The water is still running from this fountain.