Aspendos Theater and Ancient CityPlaces to Visit in Antalya

Aspendos is a popular tourist destination 45 kilometers east of Antalya. It has an amazingly well-preserved Roman period theater that holds a prestigious rank as the best preserved Mediterranean theater in the world.

The city of Aspendos is located at the base of a hill near Köprüçay, one of the largest rivers in the region. Theater and waterways are major attractions in Aspendos as they are the best standing ones in the city. The remnants of other buildings that once belonged in the city are located on the plateau where the theater leans. 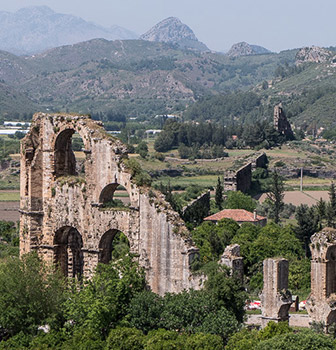 Aspendos Theater (Aspendos Tiyatrosu) is a Roman theater that represents one of the last remaining buildings from that time period, and it's intricately designed. It was dedicated to the gods and emperors of that era.The stunning interior of the antique theatre in Aspendos once held 12,000 people. Roman architects were magnificent at incorporating performance spaces with auditoriums for the audience to enjoy. The theater is used for concerts and other performances.

The uppermost section of the auditorium is covered with a gallery of columns. The audience reaches the upper rows by climbing through the galleries on either side of the stage. The theatre was built by the architect, Zeno Theodorous' son, during the reign of the Roman Emperor Marcus Aurelius (161-180 AD). In engravings on entrances to either side of its stage building it says that this theatre had been offered to gods and the house of emperor.

After the theatre, the most important ruins of the city that can be visited are the aqueducts. The Aspendos aqueduct system is one of the best-preserved examples of ancient waterways.

Aspendos was quite an active city in Roman and Byzantine periods and continued to exist during Seljuk and Ottoman times. In the theater, Seljuk repairs are visible especially on the relief in front of the monumental door extension and crude plaster coating dark red zigzag patterned plaster.

The most important reason why the stage building, which is thought to have been organized as a caravanserai where the Seljuk sultans stayed has continued to survive until today is attributed to both: Seljuk restoration and protection. Mustafa Kemal Atatürk also visited this place in 1930 and gave instructions for the restoration and reuse of the city.

The Theatre and Aqueducts of the Ancient City of Aspendos, which is included on the UNESCO Tentative List in 2015, is one of the outstanding universal values of Turkey.