Bodrum Castle (The Castle of St. Peter)Places to Visit in Mugla

Bodrum Castle or The Castle of St. Peter is located in the small rocky peninsula set on the south-west coast of Anatolia, near Bodrum. The peninsula is thought to have been used as a rear base for Byzantine troops in ancient times and later for Turkish people during medieval periods.

The Castle was built by the Order of St. John of Jerusalem (alternatively known as the Knights of Rhodes) under the guidance of The Grand Master Philibert de Naillac at around 1400s, and was ruled by them until 1522, when it was conquered by Suleiman I (Suleiman the Magnificent). 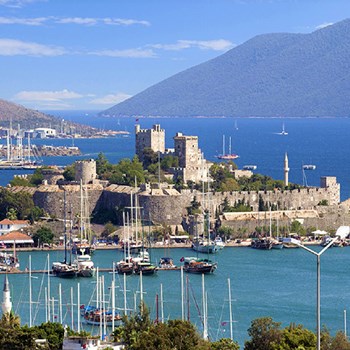 In Ottoman Period, the Bodrum Castle was first used as a small garrison and in 1895 it was transformed into a prison. During World War One on May 26th, 1915, the castle was bombarded by French battleship and many prisoners were moved inland with most of the guards evacuating before capture. When Italy invaded Bodrum Territory they set up their headquarters at the abandoned castle.

Following the success of the Turkish War of Independence under the leadership of Mustafa Kemal on July 5th 1921, when Italian military forces were dispersed, Castle was used as a military base again in 1939. In 1962, the government turned the castle into a museum for underwater discoveries of ancient shipwrescks in the Aegean Sea.

The Bodrum Castle reflects many features from the medieval European castle, but because it's situated in Asia Minor (Anatolia), it also shows cultural influence. It is considered an extension of Europe historically due to its multinational population.

The Bodrum Castle has been added to the Tentative List of UNESCO in 2016.