Diyarbakir Fortress and CastlePlaces to Visit in Diyarbakir

The Diyarbakır Fortress, located in Sur, is a historical fortress consisting of both an interior and exterior. The fortress consists of a few structures including the citadel on top of the rocky hill overlooking the Tigris River and offers stunning views.

The gates of the fortress are: Dağ (Mountain) Gate, Urfa Gate, Mardin Gate and Yeni (New) Gate. The walls were built in their present form in the mid-fourth century AD by emperor Constantius II of Romans. 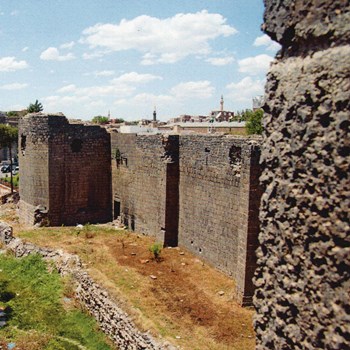 The Diyarbakir walls are the widest and longest complete defensive walls in the world, after only the Great Wall of China.

Diyarbakır Fortress was built, used, and rebuilt during periods of Roman and Ottoman dominance over the Diyarbakir region. The fortress includes walls measuring up to 53 meters that surrounded the metropolitan area as well as 63 inscriptions from various historical periods. These include Hurrian, Mede, Armenian, Roman, Sassanian, Byzantine Marwanids, Ayyubids and Ottoman influences.

The Diyarbakir fortress was first built in 297 AD by the Romans. In 349 AD, the walls were expanded to their current size under an order from Emperor Constantius II. Throughout 1500 years of history, this wall and its towers have been strengthened with volcanic rock from the surrounding region. There are 82 watch towers on these walls. The towers at Diyarbakir were mainly built by the Romans and later reconstructed by the Ottomans when they took over in 15th and 16th centuries. During defeat of Safavids, Ottomans destroyed their walls with cannons and therefore had to be rebuilt. Today, these walls become mostly intact again with them being about 33ft height and 10-16 ft thickness which also includes 1930's demolition where a section got demolished too according to it is 3mi long circumference. The Diyarbakir Fortress and Hevsel Gardens were declared as a UNESCO World Heritage Site in 2015.