Sumela MonasteryPlaces to Visit in Trabzon

Sumela Monastery is a Greek Orthodox monastery dedicated to the Virgin Mary, located at Karadağ within the Pontic Mountains, in the Maçka district of Trabzon Province in modern Turkey.

Situated high in a steep cliff facing the Altındere valley, Sumela Monastery is a site of great historical significance and cultural importance. Due to an increase in rock falls, on September 22, 2015 the monastery closed to the public for safety reasons for one year as it sought to resolves this problem. That ran through three years; however in May 25th 2019 it reopened again. 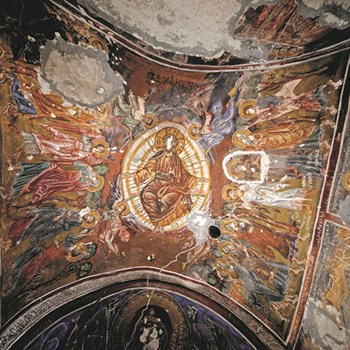 The construction of the monastery began in 385 AD with the building made from stones and clay bricks. Barnabas, a Greek monk, traveled to Sumela along with his nephew Sophronios who helped him build two rooms using rocks, followed by other monks surrounding them in the following centuries.

The Byzantine Emperor Justinian ordered the enlargement of the monastery. The monastery was looted and burnt by Byzantines 650 AD but then restored by Comnenids with 72 rooms and a rich library.

The present form of the monastery dates to the 13th century, after it acquired prominence during the existence of the Empire of Trabzon. Basil and John had endowed Sumela with rich gifts, but its most important largess was received during the reign of Alexios III (1349-1390) when he was saved from a storm by a Virgin lady and was bidden by her to restore Sumela Monastery, according to the legend of course.

The main elements of the Monastery complex are the Rock Church, several chapels, kitchens, student rooms, a guesthouse, a library and the sacred spring revered by Eastern Orthodox Christians.

In the main church, there are amazing frescoes of the entire Old Testament and New Testament. The paintings start with the Genesis (the creation) and goes until the ascension of Jesus including most of the prophets in the Old Testament. There are 140 different stories painted on the walls of the church which makes this church a very special one. Sumela Monastery has been added to the Tentative List of UNESCO in 2000.