Ballıca Cave Nature Park can be found 23 km southwest of Tokat City Center, in the Pazar District. The park is located near Akdağ mountain at an elevation of 1916 meters and has a composition consisting mostly of Paleozoic rocks formed during the Miocene period.

Marble, crystallized lime stones and aged limestone can be observed sprinkled in these metamorphic rocks (Tokat Massive). Karstic structures have developed at the distribution areas of limestones at Akdağ. The main area that makes up the Ballıca Nature Park is comprised of these structures. Ballıca Cave and travertine formations nearby are featured among these metamorphic rocks. 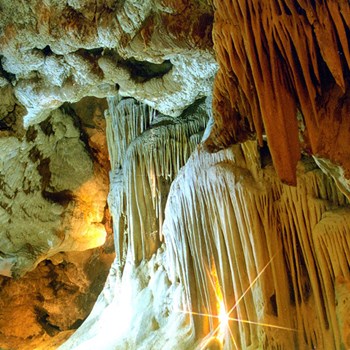 Ballıca Cave is unique in that it exists among the compound of two types of stones. It's made up of crystalline rocks, otherwise known as karstic lime stone, which cover metamorphic schists. The cave was not built within a karst belt but rather inside these single local blocks with limited rock surfaces covered with limestone. Yet this small area covers an enormous volume for a cave-with a length of 680 meters and over 6500 m2 in surface area.

The stalactites in the Ballıca Cave have a uniqueness to them as they are large, very specific shapes, and come in a myriad of different colors. In addition to stalactites of different shapes, cave pearls also form a visual system together with dazzling onion-shaped stalactites, well-developed curtain travertines and settling ponds. This system makes up the rare natural beauty of Ballıca Cave which is not encountered often in the world; Ballıca Cave stands out among all cave formations in the world.

Ballica Cave Nature Park has been added to the Tentative List of UNESCO in 2019.