Sirince VillagePlaces to Visit in Izmir

Sirince was once a Greek Orthodox village, 7 miles away from the Ancient city of Ephesus and 20 miles away from Kusadasi. It used to be called as Cirkince meaning ugly in English. The name of Cirkince was especially chosen to deter people seeking refuge or moving into the village.

The first indications that the village had been inhabited since at least ancient times are from the 1st century AD, during which Christian residents of Ephesus were compelled to leave their home for protection against prosecutors. The village stayed as a Greek Ortodox Village until the exchange agreement between Rupublic of Turkey and Greece in 1924. During this exchange Greeks living in Turkey were exchanged with Turks living in Greece. This was a forced migration both sides at the post war period of WW1. Turkish families from mainly from Kavala region moved to the area. Greek families who moved from the village founded a new town named as “Nea Efesos” (Νέα Έφεσος) 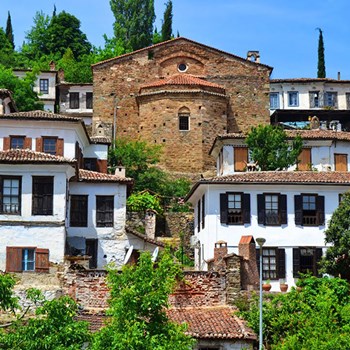 The official name change of the village was in the early years of the Republic of Turkey. Name of the village changed from Cirkince to Sirince. Until 20 years ago, agriculture was it's main industry and has been since Ottoman times. Today, as a result of its unique historical background and beauty, many novels mention or show scenes set in Sirince while documentaries produce segments related to this village often resulting in tourists visiting there quite often.

Today, tourism is the main industry in Sirince. Many homeowners turned to opening restaurants, hotels and shops with money made from olives and peaches grown in July. The most popular fruit wine produced by Sirince residents is black mulberry-seed wine - which has more of a dessert taste.

Today, visitors can find many herbal products such as lavender teas and sage among others. In the past, this village was a perfect synthesis of Turkish-Greek culture. Visitors may enjoy taking pictures of old Greek homes that are now being restored and turned into small hotels. There is an abandoned Greek Orthodox Church from the 19th century as well.