Ahlat, which is the most important point of the entrance gate to Anatolia and the junction point of the east-west synthesis, stands out with its geographical and historical features and has played an important role in commerce and cultural exchanges between east and west throughout centuries.

Ahlat became one of the three major centers of science, culture and art in the Islamic world. The city shared this honor with Belh (Afghanistan) and Bukhara (Uzbekistan).

Ahlat, with history dating back to the neolithic ages BC. It was first taken over by the Hurrians in 4000s BC and remained under various rulers until Ottomans took control. After Turkish rule had been established since 1071, it became a passage providing transition from East to West. In 12th century, Ahlat has been capital of Seljuk branch known as Ahlatshahs. 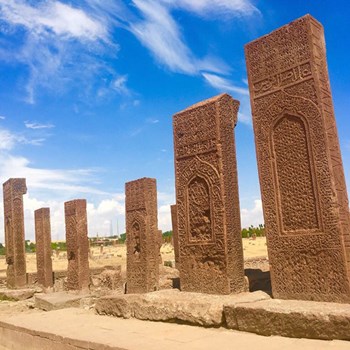 Ahlat, strategically important and historically significant, has been the center of various civilizations in every period. In the Byzantine Period it was called "Khlat" while it was "Khelath" during the Syriac Period; in the Arab Period its pronunciation changed to "Rope", but as time progressed this became pronounced again as "Ahlat".

In addition to Ahlat's natural beauty, the city is almost an outdoor museum of history. Historically significant structures include many cupolas, bezirhanes, mausoleums, fountains and cemeteries. One of the most well-known sites is the Seljuk Cemetery.

Seljuk Square Cemetery Ruins is the most important in Ahlat among many other historical cemeteries. There are some of the county's most famous tombstones and works by notable artists. Covering an area of 210,000 square meters, Meydan Cemetery ranks 3rd in size among world Turkish-Islamic Cemeteries.

There are three types of graves in Meydan Cemetery: Şahideli cist, Sandukali and Akıt. Every grave is for a person belonging to one of the following groups: those who were scientists, artists, religious people or craftsmen. The most important part of the cemetery is designated as “Kadis Section”. Kadis have the power to decide legal disputes that occur between people in certain Muslim-majority countries as well as give out punishments for violation of Islamic laws. It is also seen that they can be tasked with other religious responsibilities such as recording marriages and implementing government policies on education.

When we look at the tombstones, they provide identity information of deceased on the east side of the stones. In some cases, where the person is from and what profession they had can be found there as well. In addition to the double-headed dragon motifs seen in Central Asian Turkish culture, there are muqarnas decorations and geometric patterns. These appear on the west side of the tombstone as well. On the east side is an inscription which credits the person who made this tombstone, verses from the Holy Quran, palmettes that resemble grass or wheat stalks with small flowers dotted among them; oil lamps also appear here along with other smaller decorative elements like textured triangles that create a more richly detailed pattern.